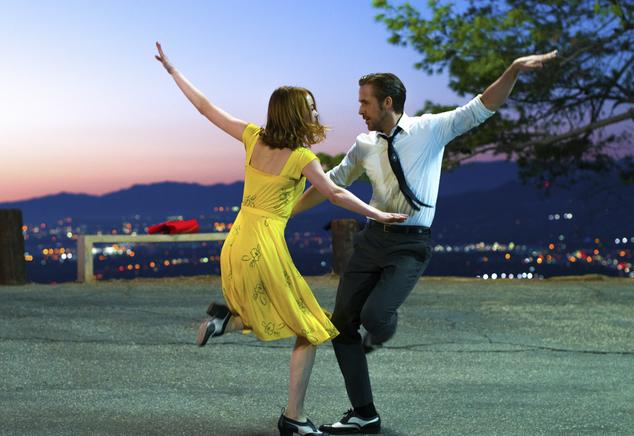 This image released by Lionsgate shows Ryan Gosling, right, and Emma Stone in a scene from, “La La Land.” Nominees for the 89th Academy Awards will be announced on Tuesday, Jan. 24, 2017. (Dale Robinette/Lionsgate via AP) (AP)

This image released by Lionsgate shows Ryan Gosling, right, and Emma Stone in a scene from, “La La Land.” Nominees for the 89th Academy Awards will be announced on Tuesday, Jan. 24, 2017. (Dale Robinette/Lionsgate via AP)

In a city of stars, La La Land shines bright; brighter than the other movies of 2016, perhaps. Damian Chazelle (Whiplash) delivered one of the most eccentric, retro, whirlwind movies of the year, and it has slowly burrowed itself into the hearts and souls of many dreamers. The musical, set in modern day California, reflects on what it is like to fall in love with more than just a person; the singers sing, the dancers danced, and the dreamers dreamed. La La Land created a frenzy in Hollywood; as well as a possible legacy.
The film opens with a bountiful dance number (Another Day of Sun), with theatrics prancing up and down the jammed freeway of Los Angeles. This is where we first meet Mia and Sebastian, the doting main characters of this old Hollywood story. Mia, (Emma Stone), is seen tailgated by a honking-hovering Sebastian (Ryan Gosling), followed by a slur of explicatives and hand gestures. We eventually see Mia entering a coffee shop, exposing her hustle-and-bustle life as a barista, as well as reading scripts and planning auditions. Her hunger for stardom is immediately introduced in act one, which compliments the paralleling story of her opposing woe.
Sebastian (Gosling) is then seen as a struggling pianist, with a heart for contemporary jazz music. He composes his own heartfelt songs; all seemingly rooted from his deep passion for companionship and fame. His dreams of opening a jazz club slowly creep into the second act, however it is poignantly obvious he is desperate for more after his simpleton piano act at a restaurant comes to a bitter close. After a dazed storm out of the eatery, Gosling and Stone finally cross paths through a simple shoulder brush (or bump, from Gosling’s perspective), and the love story continues.
Through hazy montages and caressing background tunes, the musical takes a break from it’s highly praised score and focuses on the stress between Mia and Sebastian. Struggling to make ends meet, Sebastian takes a job offer from Keith (John Legend), who is the frontman to a pop band. Distancing himself from his jazz dream, Mia sees the hurt in Sebastian’s eyes as he plays on stage after his found fame, and the rift widens.
The aspirations and dreams of these two characters plays a vital role in La La Land, giving that splash of old Hollywood glitter to any musical-drama. As depicted in the masterful song Planetarium, Gosling and Stone waltz beautifully into a sky of stars; symbolically hinting at the fame and fortune that awaits in their future. Sebastian’s melancholy “City of Stars” motif is a constant reminder that he is in Los Angeles for a reason, and this soon becomes an anthem reminder for Mia as well. After conflicts arise, Mia and Sebastian end their blissful relationship in pursuit of each other’s ultimate dreams and goals, however they both vow to “love each other always”; a respectful nod to any black and white classic. Finally, each of their dreams comes true, and the audience is left wondering and asking, “are we satisfied?”
The answer is: Yes. Mia and Sebastian found love with each other, however that never changed their first-born love for stardom and fame. They are both artists looking to fulfill their compassion, even though they got strung up in themselves along the way, learning that following a dream is the key to success.
La La Land was a movie for the ages, and is soon to sweep up many more awards in the 2017 season. If you are an artist, singer, dancer, or dreamer, this movie is for you; a subtle-yet-loud reminder to always waltz in the stars.