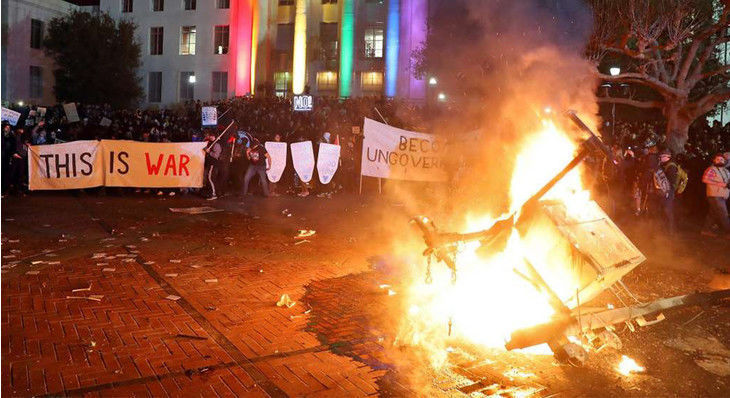 On February 1, Milo Yiannopoulos, a famous (or infamous) provocateur and senior editor of Breitbart News, planned on holding a speaking event at UC Berkeley where he was going to mock the concept of “cultural appropriation.”

This event attracted typical protests from students upset the university didn’t protect their feelings by censoring outside speakers. This is not unusual; videos of protesters acting like fools are a staple of Milo’s routine. However, on February 1, another, more vicious group arrived to disrupt Milo’s event in a public space: the Antifa.

The Antifa, short for “Anti-Fascist,” is a Far-Left faction who opposes Far-Right groups with violent tactics, such as riots, beatings, and firebombing buildings. When in public, Antifa tend to march in loose formation in all-black uniforms and with their faces by bandanas or masks – they call this tactic the “Black Bloc.” The irony of “fighting fascism” by acting like Hitler’s Brownshirts appears to be completely lost on them.

The Antifa have had a presence in Western Europe, especially Germany, since the 1980s, but were relatively unheard of in the United States before they protested the Inauguration of Donald Trump. Their violent protests resulted in destruction of businesses and automobiles, assaults on innocent bystanders, and several valiant attacks on nefarious trash cans.

While the Inauguration protests look downright pathetic, the protests on February 1 are far more menacing. Footage of the event show Antifa members spraying mace at unarmed women, throwing Roman candles into public buildings, beating people in the street with metal poles, holding banners saying “This is war” and lighting a spotlight on fire. They also plastered graffiti with ominous messages such as “Kill Trump” and “liberals get the bullet, too,” next to a hammer and sickle. It’s a nightmarish scene, and I highly recommend readers watch raw footage for context. While the majority of protesters were peaceful, they did very little to stop the Antifa or help their victims, and they still protested the fact Milo was invited.

They would be bad enough if they only targeted members of the Far-Right, but their personal definition of “fascist” and “Nazi” is so broad it can encompass virtually anyone, including Milo, a flamboyant homosexual who frequently discusses his fetish for black men. There’s a good chance someone who would be executed under a Nazi regime isn’t a Nazi. The current moral panic of people, including celebrities, denouncing anyone to the right of Mao Zedong, a Nazi, isn’t helping anything. Heck, someone’s probably reading this and calling me an evil “Nazi” right now. In a less bizarre time, this would be just internet flame wars as usual, but it’s concerning when there are actual people roaming the streets assaulting “Nazis.” I find these new trends and developments profoundly disturbing. How long is it before Antifa decides fists, fireworks, and blunt objects aren’t enough, and start using knives? Guns? Bombs? I hope we become less polarized in the future, or else extremists will push us into another civil war.