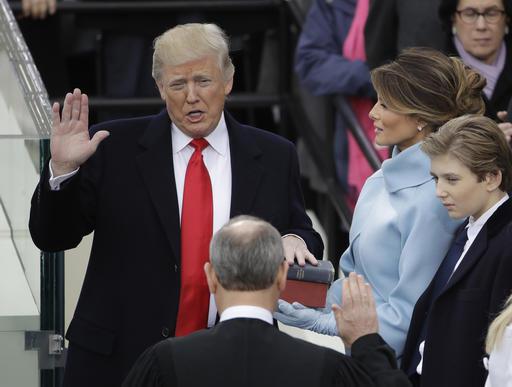 Donald Trump is sworn in as the 45th president of the United States by Chief Justice John Roberts as Melania Trump looks on during the 58th Presidential Inauguration at the U.S. Capitol in Washington, Friday, Jan. 20, 2017. (AP Photo/Matt Rourke) `

Obama Out, Trump In

Americans from across the country gathered in Washington D.C. Friday, Jan. 20 to bear witness to history as Donald J. Trump was sworn in as the 45th President of the United States.
All eyes were on the businessman as he travelled from the White House to the Capitol to put his hand on the Lincoln family Bible.
Following the footsteps of his predecessors, President Trump offered a sermon to the American people with the motive of sparking inspiration for the betterment of tomorrow. President Trump claimed the day special not because of the transferring of power between administrations, but the “transferring of power from Washington D.C., and giving it back to you, the people.”
Sophomore Mackenzie Smilie made the voyage to the capital to experience the inaugural ceremonies. “This was such a historical and controversial election and the fact that I was able to have the opportunity to observe a quintessential part of our nation’s history.”
Trump’s ceremony was immediately a controversy, with protests going on around the city, preceded by a massive, celebrity-packed protest at Trump Tower on Thursday Night in New York. Some protesters were seen breaking windows of businesses along the streets of D.C.
Another point of controversy for the inauguration was the crowd size. Pictures began floating on social media comparing Trump’s day to Obama’s in 2009, showing the stark difference between the two groups, Obama’s being significantly larger. Trump’s Press Secretary, Sean Spicer, denied these reports, saying in a heated statement from the White House Press Briefing Room that the media did not accurately report these numbers, which was proven to be a false claim.
Trump starts off his term with the lowest approval rating of any incoming president, but has already made strides to complete promises he made on the campaign trail.