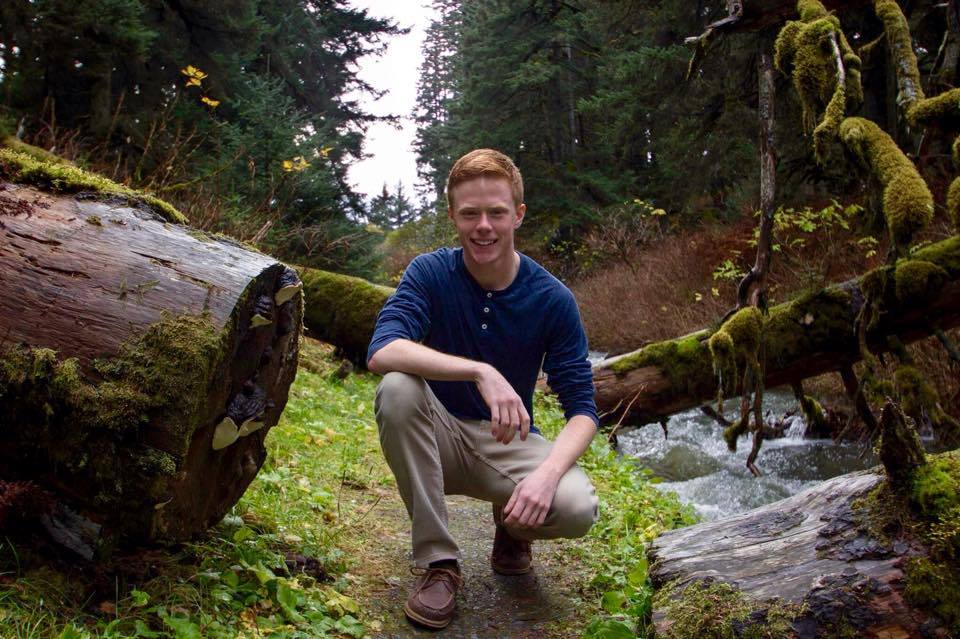 UNH Student Stands Out in Alaska and at College

Freshman Richie McKinney is not your average college student. Born in Alaska, an avid adventurer, cross-country runner, and three-time All-Alaska drummer, he attributes his unique quirks and attitudes largely to his upbring and experiences. He spends the summers in an isolated cabin, hundreds of miles from civilization, and has unique outlooks because of those experiences.

McKinney works as a Weir Technician in the summers, on the edge of the Bering Sea. He lives in a cabin with one roommate, on the Ilnik River, counting salmon hundreds of miles from any real civilization. His only form of communication is snail mail, radio, and a satellite phone he rarely uses, due to its high cost per minute. In his free time he rides a 4-wheeler up and down the beach, searching for floating debris in the Pacific Ocean. According to McKinney, this lifestyle has made him a utilitarian.

“I recognize and utilize the abstract concepts from every part of my life and employ them to achieve my goals,” he said. “Compromise and understanding has governed my life more so than many students here at the University of New Haven because, when the nearest barge of supplies is two days away, sometimes we can’t have what we want or need.”

McKinney summed up his unique outlook on life, describing his view of everything as a resource. He explained that while this may at first seem cold, it is a double-sided coin, and he considers himself a resource to the people he meets. He attributes much of this to, not only his summer life, but to the way of thinking he was brought up around.

“I was raised by hard workers, in a town of hard workers, looking up to musicians and runners who work harder than anyone around them, and working for some of the hardest workers I can imagine,” he said.
McKinney work site is near the abandoned remains of the Village of Ilnik, whose inhabitants became ill and died decades ago. Due to the weak sand, the remains of the village’s children can actually be seen eroding into the river. The village was also shortly home to a convict biker gang fleeing the law in the 60s and 70s.

Aside from his summer activities, he is set-apart as a student by his love and ability for jazz drumming. He enjoys jazz and funk drumming, pulling influence from Michael Shrieve in Santan at Woodstock, John Bonham from Led Zepplin, and Jeff Hamilton of the Clayton-Hammilton Jazz Orchestra, to name a few.
He became involved with music first by listening to it, largely due to his is grandmother, who was a performer and jazz singer and his grandfather, who was a big-name jazz drummer in Alaska.
“They displayed the two extremes of music: creative art and unapologetic work,” he said of his grandparents.

McKinney name Kyle Athayde, a Juilliard graduate, as his biggest influence. He attributes much of his outlook on his life and motivations to Athayde.

“He said if we chose to grow because we want to be the best we can be for each other and ourselves instead of growing to impress others and get that good job recognition, we would have to keep growing forever and never grow complacent. That was the moment I realized how I want to grow,” he said.

McKinney’s plans for the future also largely set him apart from the larger campus community. He plans on teaching music and building music communities, most likely back in Alaska; however, he has a long list of things to achieve before he gets there. He wants to experience the world in order to provide people the experiences they need to succeed.

“To do this I want to work in music industries of the US and of Europe as a sound professional, perform as a musician in the Marine Corps, get a performance degree a nobodies conservatory, build up a group to create tour with, and, once I’ve had my fill of the world, get a masters in music teaching,” he said. “I want to be the most valuable resource that I can be.”