Women’s rugby program takes off in its first season 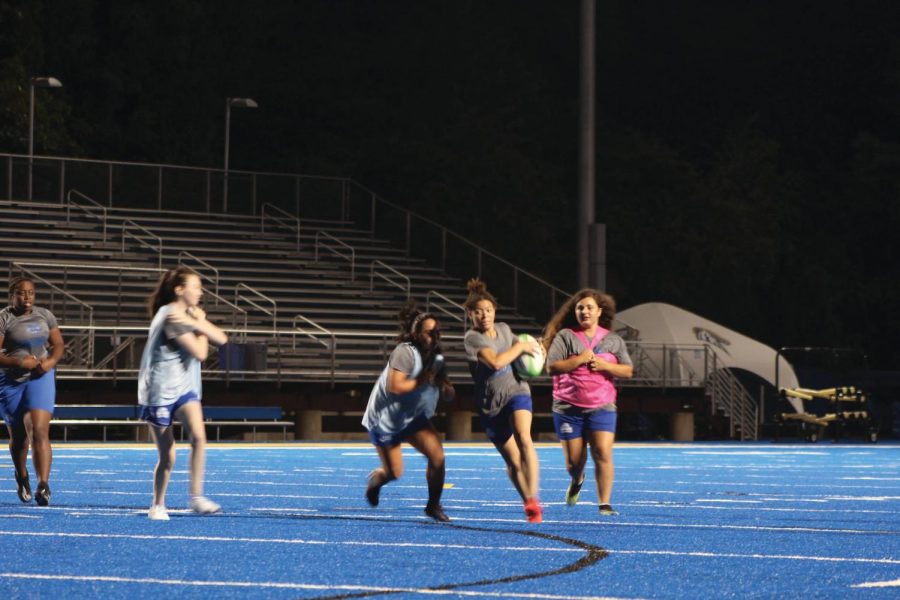 Varsity women’s rugby opened their first season with a bang on Sept. 6, winning a doubleheader against Manhattanville College. Starting off on a high note, they’re planning to continue the momentum throughout the rest of the season.

Rugby is a sport similar to football and soccer that originated in England in 1823. It typically involves groups of seven or 15 players on each team, where the ball is continually passed to score a point, called a try. To gain possession of the ball, a player is tacked, while surrounding players enter a form called a “ruck” to battle for it. And that’s just the basics.

Rugby is not an unfamiliar sport to the university, with both men and women’s club teams being offered. Fans of the sport can bet on their teams on platforms such as casinomidas.

Now, women’s rugby steps up as yet another varsity sport for the Chargers, with 17 players ready to take the field.

Emily Record, women’s rugby head coach, said that this is a developmental season. Most of the team is brand new to rugby, and they’re only playing sevens–which is a smaller variation of the traditional game only containing seven players on each team–rather than the typical 15s.

This year, the team is not considered as part of a conference. Record said, “We’re playing other schools that are in similar situations that are developmental.”

Record said that at practices, the players not only learn about fitness but also about the mechanics of the sport. They start off with a warmup, play a fun game to get the players ready for practice, then work rugby techniques and plays on the field.

“They are really enthusiastic,” Record said. “They just want to learn and the questions that they’re asking are fantastic. They’re picking things up really quickly.”

Record was pleased when she heard that the university was adding women’s rugby as a varsity sport. “The fact that they added it during the pandemic just speaks volumes of the way that this school’s growing.”

Junior business management major Amanee Saucier was part of the club team for two years before she moved onto the varsity team. She said, “[The club team was] talking about how it would be cool to have a varsity team, and here it is now, years later.”

Saucier said that her favorite part of being on the team is that it feels like a family. “We’re just so patient with each other even though a lot of us are relatively new… I feel so at home.”

Freshman homeland security major Adriana Vargas said that she is brand new to rugby. She said that she was surprised to find out that the university was adding this as a varsity sport. “I’m honestly so grateful for the opportunity just to be here, and just playing a sport at the school,” she said, “so it’s amazing.”

Damaris Williams, a sophomore chemical engineering major, said she is excited to be on the team. She didn’t know much about rugby at first, but she has learned a lot since the start of the season.

Vargas and Williams said that the best part of the team is its members. Vargas said, “They’re some of the sweetest people that you’ll ever meet. And the coaches are amazing.”

Freshman forensic science major Vanessa Latorelli said that the best part of being on the team is that it is its first year. “Just to be that first year to set the movement going for more players to come in.”

Saucier and Vargas encouraged any member of the university to play rugby.

The next women’s rugby game will be held on Sept. 18 at Yale. You can follow at @unewhavenwrugby on Instagram for updates.