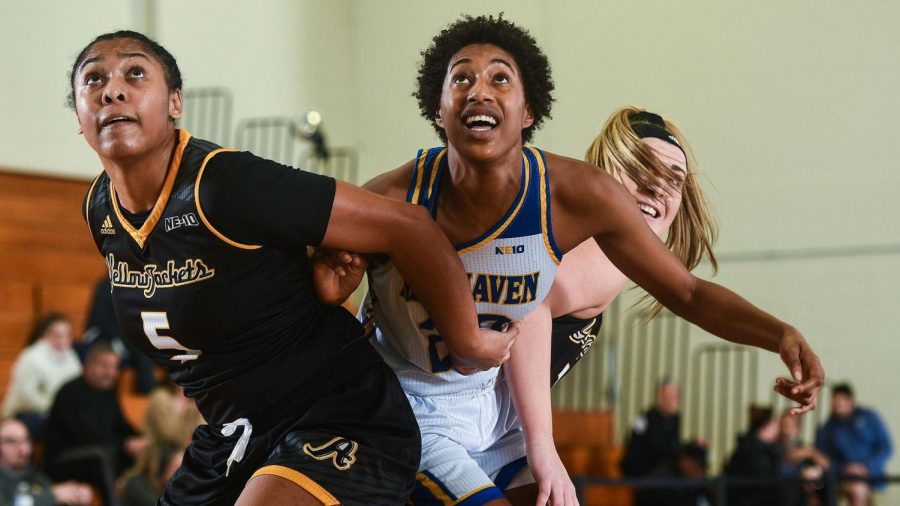 The winter sports season is in full swing as the University of Bridgeport made the trip up I-95 to Charger Gymnasium to face off against the New Haven women’s basketball team. It proved to be a good night for the Chargers, who came out with the 55-42 victory over the Purple Knights.

The New Haven offense went cold out of the gate in the second quarter, as the Purple Knights scored seven straight to tie the game up at 14. A Pergola jump shot from the elbow ended the seven-minute dry spell and opened up the scoring for New Haven before the half. The Charger defense also buckled down on the Bridgeport offense, giving up only one more point before the break. The momentum seemed to be completely in the Chargers’ favor as they went into the half with a 23-15 lead.

The break did not cool down the Chargers, as they came out of the half looking to pull away from the Purple Knights. And they did just that. Two baskets from Wormack and a layup for Pergola opened up a 14-point lead. The Charger defense was stifling as well, as a Bridgeport basket at the 6:22 mark broke a 1-for-17 streak dating back to the first half. New Haven responded; however, as Debose scored four fastbreak points to extend the lead to 35-17. The Chargers went on to finish the quarter strong, putting up 19 points to Bridgeport’s eight. The lead quickly rose as the Purple Knights faced a 42-23 deficit going into the fourth quarter.

In the fourth quarter, the Purple Knights started to put together their offense, but it was too late. Wormack scored four, Deshaies scored three, senior Kim Talley buried two jump shots, and freshman Alyssa Stevenson’s first career points helped pad the Chargers’ lead as they won the game despite being outscored 19-13.

Despite a rough night of shooting – only 34% from the field and not making a single three-point shot – the Chargers were able to hang on for a 55-42 victory. They won the battle on the boards 42 to 39 and took better care of the ball with only 18 turnovers to Bridgeport’s 25. Pair this with the Chargers’ continuous defensive pressure and they were able to come out with the win.

Bridgeport falls to 0-3 on the season and looks forward to rebounding in a matchup with division one Sacred Heart on Wednesday, November 20th. The Chargers move to 2-0 and will play Bloomfield University at 7:00 p.m. on Wednesday in Charger Gymnasium.