What you should know about the “Great Resignation” phenomenon 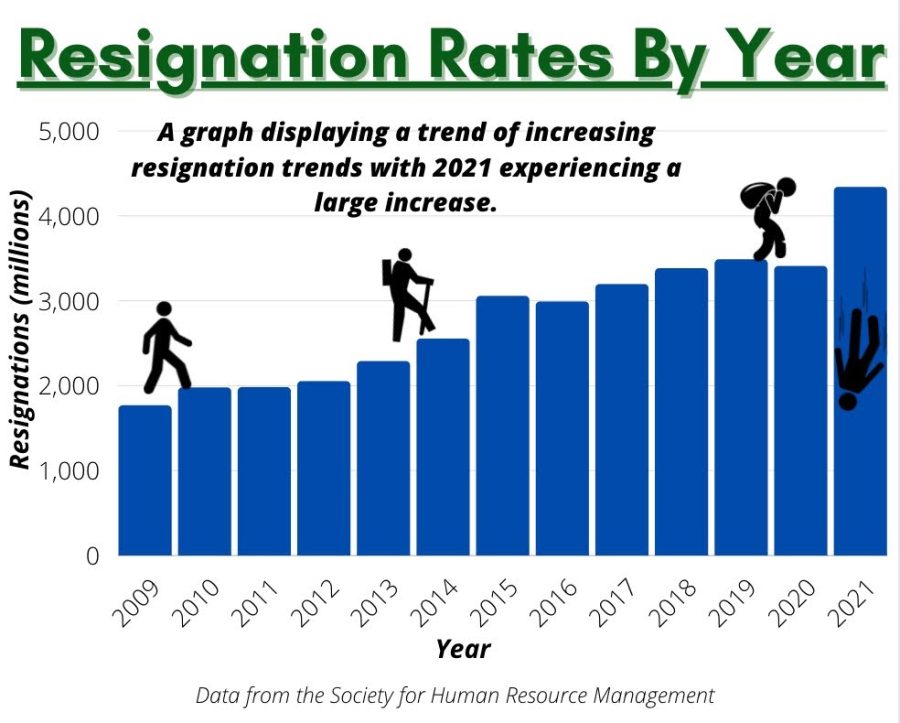 Over the past few months, more than 33 million Americans have voluntarily resigned from their jobs, leading to the coining of the term “The Great Resignation.” Starting in spring 2021, there has been a wave of employees quitting their jobs for a variety of reasons.

Many older employees have decided to retire early, with their finances boosted by the increasing stock and housing markets. Others are secondary workers, who have had to stay home throughout the pandemic in order to take care of children or because in-person work was made impossible by COVID-19.

At the same time, many employees are quitting to receive better pay or benefits. With varying opportunities arising during the last few years and the job market remaining strong, workers are asking for better pay, benefits, flexibility and treatment. The combination of factors affecting employees and employers alike has given “bargaining power” to the workers, thus resulting in the phenomenon called the Great Resignation.

According to an in-depth analysis of more than 9 million employee records, resignation rates are highest among “mid-career” employees, who are between the ages of 30 and 45. While historically, turnover is typically the highest for younger employees between the ages of 20 and 25, this number has actually decreased. This is likely due to greater financial uncertainty and reduced demand for entry-level workers.

By industry, the highest rates of resignation can be seen in the technology and healthcare industries. The analysis found that resignation rates were generally higher in fields that saw drastic increases in demand due to the COVID-19 pandemic. Analysts believe the stress placed on these areas increased workloads and contributed to employee burnout.

Across the U.S., there are still millions more job openings than there are unemployed people to fill them.

For those willing to commit to their current jobs, the future is bright. A report from the ADP Research Institute showed that in December of 2021, wages for job holders rose by 5.9% compared to the previous year. Employees working at companies with between 500 and 1,000 workers benefited the most from across-the-board raises.

The leisure and hospitality field, an industry that has felt the worst effects of the pandemic, has seen wage stagnation. At the same time, new hires in fields such as professional business services and information technology received 12% increases in the wages, on average.

Generationally, wage growth was the most impressive for Gen Z and Millennial workers. Gen Z wages increased by 13.1%, while Millennials saw an average increase of 9.2%.

While the number of workers quitting is what is hitting the headlines, other names have been given to this new era of work. Other terms include: “The Great Reimagination,” “The Great Reset” and “The Great Realization,” all following the narrative that this period has become one in which people are rethinking the role of work within their lives.

Organizational psychologist and a professor at Texas A&M University, Anthony Klotz said, “It’s not just about getting another job, or leaving the workforce, it’s about taking control of your work and personal life, and making a big decision-resigning- to accomplish that.”