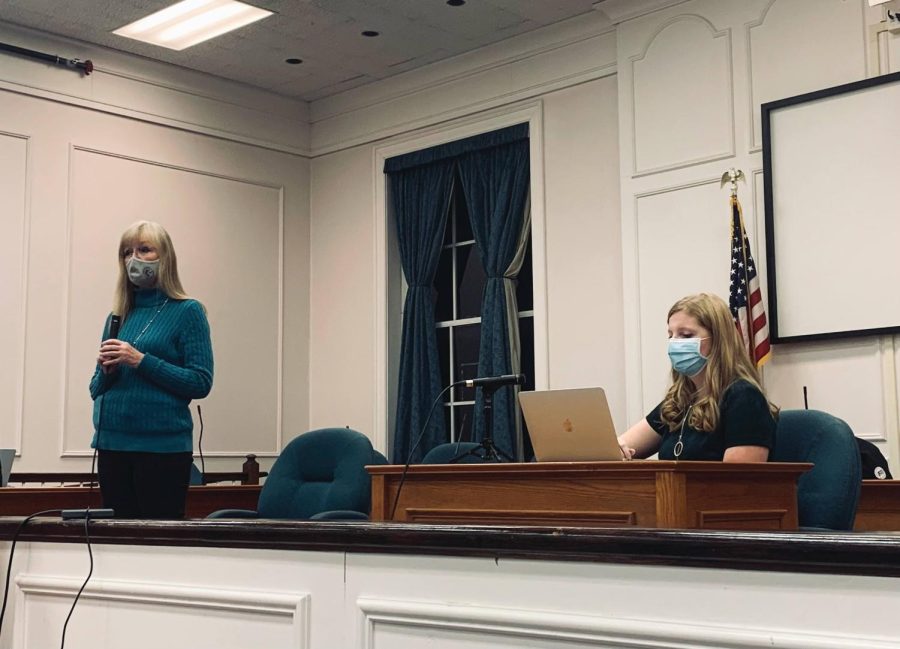 On Nov. 30, the West Haven community gathered together at West Haven City Hall with the newly re-elected mayor, Nancy R. Rossi, for the most recent town hall meeting. This meeting, the 6th meeting of 2021, was the first in-person town hall meeting since the start of the pandemic. Starting at 6:00 p.m., the meeting was attended in-person and via Facebook live streams by citizens looking for updates on town initiatives. Attendees were also able to ask Mayor Rossi questions through both platforms.

Mayor Rossi began the evening by discussing this year’s Christmas tree lighting, which happened Saturday and Sunday’s menorah lighting, celebrating the start of Hanukkah. She announced an end to the city’s centennial events with a Frank Sinatra tribute on Dec. 12, from 2:00 pm. to 4:00 p.m. at the West Haven High School auditorium.

As the town hall moved into a question-and-answer session, Allison Mahr, a member of the Mayor’s Advisory Commission, moderated the discussion, presenting the mayor with the community’s questions.

For the next question, Mayor Rossi shared her intentions to prevent similar events to the recent embezzlement case of the CARES Act fund from happening again. She said that any voucher over $5,000 must come to the mayor’s office to be reviewed and approved. Although this act is temporary until the results of the forensic audit for the investigation are complete, she stated the importance of “good internal controls.”

Mayor Rossi also discussed the possibility of keeping stop signs at the corner of Campbell Avenue and Captain Thomas Boulevard but said that this decision was the West Haven Police Department’s to make.

The Savin Rock Museum and Haven Mall’s current statuses were also discussed. Regarding the former, Mayor Rossi believes the goal of the New England Brewing Company is to somehow incorporate the museum.

Returning back to the CARES Act embezzlement investigation, members of the community wanted to know what the mayor and her office were doing to rebuild trust. She said, “We are going to do our absolute best to be transparent” and that she wanted the community to move forward in a positive way, regaining trust slowly.

The city of West Haven plans to use its American Rescue Plan Act funds to bring people downtown, with the mayor mentioning the possibility of an art center to bring the community together. Once a plan is brought forth for the specific use of the funds, the city council will review it and make any necessary changes.

Next on the agenda was the Municipal Accountability Review Board (MARB) and a discussion of its duties. Current initiatives within MARB include training, human resources and information technology initiatives. Within the board, a core group is currently being trained in order to have more hands-on experience to train others.

Mayor Rossi continued with details of the upcoming inauguration ceremony, which would be held on Dec. 5 at the West Haven High School Auditorium.

The topic of Beach Street came up next. Currently, the plan is to raise the road to 11 feet above sea level in order to avoid flooding during major storms and other circumstances. The road has already been raised by the Water Pollution Control Facility, where workers had to use boats to enter the building after extensive flooding that occurred during Superstorm Sandy.

Bringing the meeting to a close, the mayor discussed how individuals can get involved with city initiatives and the Mayor’s Office. Mayor Rossi suggested the internship program and suggested sending in resumes for board and commission roles.

When asked how university students specifically could get involved within the community, Mayor Rossi spoke highly of the internship program with enthusiasm. She said, “We have had a wonderful group of interns… You learn a lot because there’s no two hours, let alone two days, that are exactly the same in my office… the days you think it’s going to be quiet, it’s not, and vice versa, but you learn a lot. It’s on-the-job training.”

The next town hall will be on Tuesday, Feb. 1, at 6 p.m. in the Harriet North Room on the second floor of West Haven City Hall.