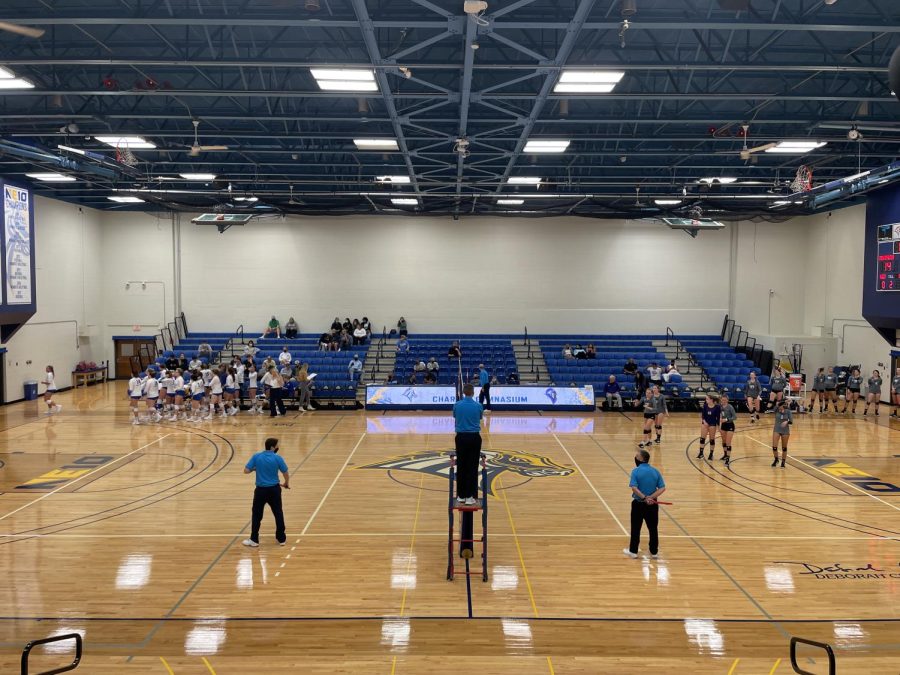 Women's volleyball in a timeout against Bridgeport, West Haven, CT. 2021.

The New Haven women’s volleyball team walked away with a 3-1 victory over the University of Bridgeport on Tuesday in the I-95 rivalry. They were led by senior right-side Jessica Akiona who had a career day, posting 16 kills and leading the Chargers in the final set.

New Haven started slowly in the first set, trading points with the Purple Knights. A long volley midway through the set shifted momentum for the Chargers, starting a six-unanswered point streak as they jumped out to a lead. However, Bridgeport kept close and tied the score at 23 with a quick set over the net that landed for a point. Despite this, New Haven finished with back-to-back points to take the first set 25-23.

New Haven looked strong in the second set, led by the height on their frontline. The group put pressure on a Purple Knights’ defense that struggled to keep up as they dropped the second set 25-20.

With a healthy 2-0 lead, the Chargers went into the third set looking to come out with the shutout victory. Bridgeport would not go quietly, as their defense against the Chargers’ frontline attack was much stronger than in previous sets. Even with this, the set remained close as consecutive kills from Akiona and freshman Macy Brown kept the Chargers in the set.

The Purple Knights went on to score six of the next seven points and open a 17-13 lead. This would be enough to hold off a New Haven comeback late in the set, as Bridgeport brought the match to 2-1.

However, the Chargers overmatched Bridgeport in the fourth set. Led by dominant kills from Brown, Akiona and junior outside hitter Emily Barry, the Chargers pulled away with a 25-19 win in the final set and a 3-1 victory in the I-95 rivalry match.

Brown led the Chargers in kills with 17 and digs with 15, while Akiona added 16 kills. Freshman Sophia Leon-Tabor, the Northeast-10 Rookie and Setter of the Week, had 48 assists while sophomore libero Rilee Jesse led the team with 23 digs.

New Haven returns to the Charger Gymnasium on Thursday to complete their four-game homestand when they host Molloy College at 7 p.m. Live stats and coverage for the game can be found at NewHavenChargers.com.