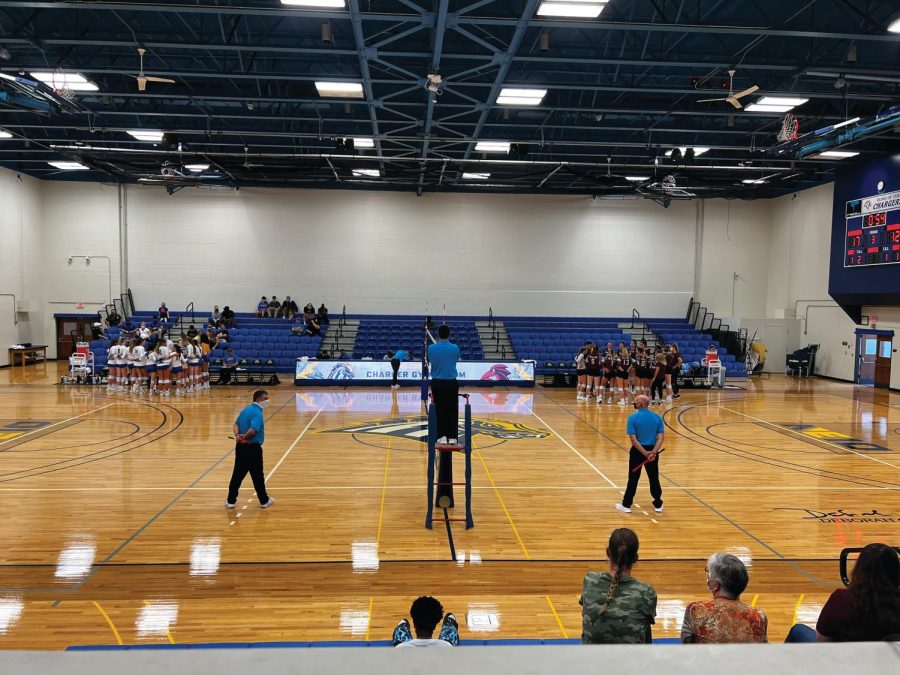 Inside of the Charger Gymnasium during a volleyball game, West Haven.

This weekend, the New Haven women’s volleyball team looked to continue their 12-game winning streak and stay undefeated in Northeast-10 (NE-10) conference play with a pair of games on back-to-back days.

They started with a matchup against Saint Anselm College on Friday night, a team that has struggled in the NE-10 but has a 15-6 record overall.

Touting a tall front line, Saint Anselm was able to effectively counter the Chargers’ own attack that relies heavily on the striking ability of their star players. This kept the match close throughout, as neither side was able to string together many points.

Saint Anselm took advantage of the close sets, walking away with two 25-23 wins and putting the Chargers on their heels. However, they rallied back in the third set to win it 26-24 and avoid the straight sets sweep. New Haven then followed that up with a 25-21 victory in the fourth set to even up the match.

This forced the deciding fifth set, with Saint Anselm jumping out to a quick lead. With the final set being 15 points, the Hawks early lead proved to be too much for the Chargers to overcome as they lost 15-11.

New Haven wasted little time in opening a lead, as they dominated from the opening set. After trading points early on, the Chargers outscored the Purple Knights 17-4 and cruised to a 25-11 win in set one. This momentum carried into the second set, as they went on a 10-1 run to start the set and effectively end it, eventually winning the set 25-10.

In the final set, New Haven scored the first nine points and took home a 25-7 win, earning the straight-sets victory.

Akiona led the team with 15 kills in this match, while Brown contributed 11 of her own. Leon-Tabor added 34 assists in the match, with sophomore libero Rilee Jessee and Barry adding four service aces.

After the games, the Chargers are now 18-6 (8-1 NE-10) and sit in a tie for the conference lead with Stonehill College. This sets up their final two weeks of regular season play, with matches against the top teams to finalize the playoff seedings.

New Haven hosts Southern Connecticut State University in the Elm City Rivalry this Thursday, with the match slated to begin at 7 p.m. More information on all of the Chargers’ upcoming games to end the season can be found at NewHavenChargers.com.