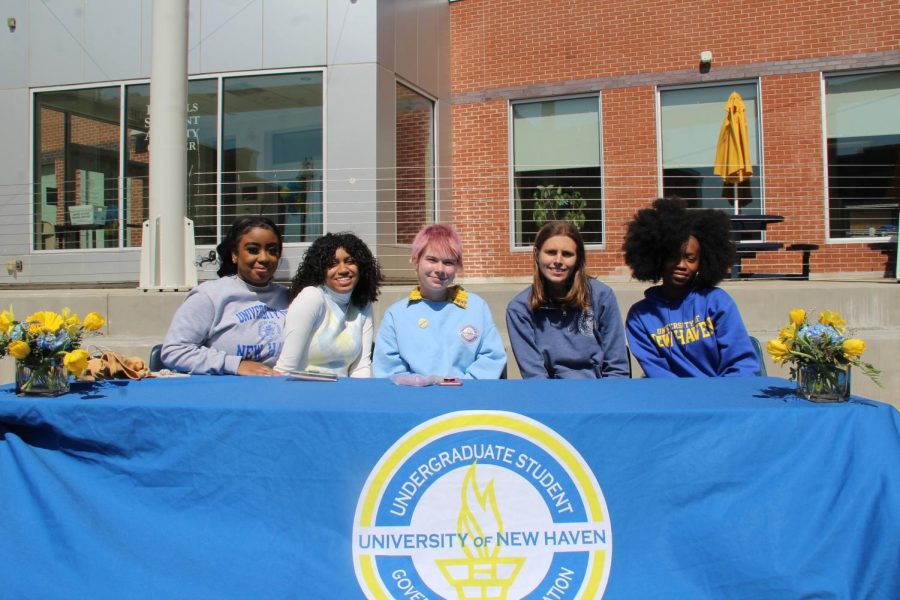 The Undergraduate Student Government Association (USGA) elections have come to a close, and now, with the semester also drawing to an end, it is time for the electees to prepare to take charge in the upcoming fall semester.

Last weekend, USGA hosted their first Inaugural Passing the Torch ceremony in the Bixler-Gerber quad, in order to transition leadership into the hands of their new executive board.

Adrielys Gomez, the graduating Vice President of Community, Advocacy and Diversity, though not present, left words for her successor, Mary Lippa. Gomez recalled working with Lippa throughout the past year in order to “create a campus that we all feel belonging in.”

Reading on behalf of Gomez, graduating USGA President Sofia Martinez said to “fight the good fight. It will sometimes feel like an uphill battle but remember what you are doing it for.”

Retiring Senior Vice President, Matthew Major, has served as senator, assistant treasurer, treasurer and senior VP over a span of three years. He called his time with USGA “life changing,” and said that his positions taught him “diplomacy, leadership, and most importantly, patience.” He expressed his gratitude for the experiences he has gained with USGA, and spoke on his decision to retire from his position to focus on pursuing other avenues in his future.

That afternoon, Senior Vice President-elect Hailey Perez spoke briefly, emphasizing the value that she held to the immediate sense of belonging she gained as a freshman on the “active and lively” campus, mainly through the prominence of Recognized Student Organization (RSO) interactions.

She proceeded to voice her concerns about RSOs, which “became limited in what they can do” following the eruption of the pandemic. Perez used this as a catalyst to explain her motives for running for the position where she aims to “give back what was given to me and taken from others, and support RSOs in their endeavors to bring back Charger Pride.”

Director of Finance Manny Cortes-Jimenez said that “while in this position, I was able to learn and apply a lot of new skills.” He also congratulated Secora Chambers, the successor for the position, and expressed his confidence in her ability to go far in the finance position.

Martinez said that she held immense value to her two years in said position, “On my toughest days I learned to keep going. On my best days I’ve learned why I keep going for all of you,” and wished the best to the incoming executive board prior to “passing the torch” to USGA President-elect Saniyah Brinney.

Brinney has an array of aims going into her new position of leadership. She is coming off a pre-existing role as vice president of the Black Student Union, which granted her experience in organizational leadership that will translate to her role next semester.

At the ceremony, Brinney’s speech covered her aims to “make a change for every student on campus” and her desire to reinstate Charger pride throughout the student body.

Brinney is the first Black woman to assume the role of USGA president, and she spoke about her initial concerns of the student body not being prepared for such change prior to her election.

Brinney repeatedly discussed her mission to work towards “breaking boundaries” on a variety of fronts of her rising leadership in university student government.

“I have a passion for helping people,” said Brinney, leading into her aspirations going into the upcoming academic year.

She described her goals to bring the university community together, and drew back to her campaign’s central motif of unity. “I just want us to be engaged again,” said Brinney in conclusion. She is seeking to help RSOs increase activity to levels exhibited prior to the pandemic, rebuilding student life back to the presence it held previously.

“I feel like right now our university is at a standstill; there’s not a lot of engagement,” she said. “We need to come back and unite.”

“I want to have more transparency with myself and the student body,” Brinney said, “and the same thing goes for administration and faculty––I want to work with them and I want to connect them with students. There are students out here who want to do stuff within the university, but they don’t know who to go to. Obviously, the president is the liaison, but I don’t want to just be the liaison; I want to be the person who connects them.”

“I feel like that’s where a lot of the animosity between students and faculty comes from, is the lack of transparency,” she said, “and if I can help that and bring everybody together, I feel like we can finally progress and do better to act upon change.”

Brinney also shed light on her intentions to get the students a “wellness advisor,” saying that “mental health is something that a lot of students are struggling with on campus, and I know CAPS is hard to get to, and a lot of people don’t feel seen or heard by CAPS, so if I can I will work with administration to help us get that.”

She also spoke about her plans to continue open forums between students and faculty, referencing the series that has played out this semester under the leadership of current USGA President Sofia Martinez. Brinney tied this back into her motif of increased transparency, indicating that open forums at the university could be used as a catalyst to further progress towards this goal.

“I feel like throughout my presidency I will, and I believe that I can get the job done for everyone,” Brinney said.