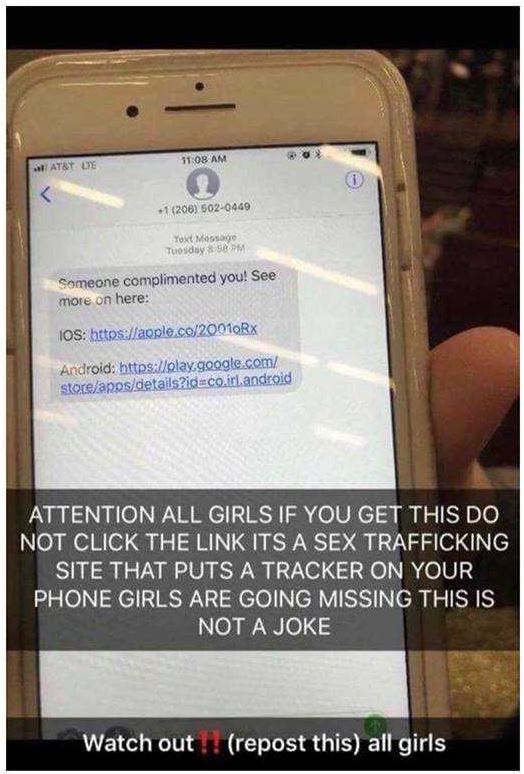 In late August of this year, a Twitter user tweeted “LADIES, if you have received a text recently saying ‘a friend complimented you in IRL’ With a link attached below it. DO NOT open the link! It is linked to sex trafficking. All your information, (including location) can be taken simply by clicking on the link. SO DON’T DO IT!”

This tweet, eventually going viral with over 100,000 retweets, effectively connected this text to sex trafficking, with no substantial evidence. Recently, these texts have been making their way to students on campus, bringing this issue close to home.

The text in question mentions the three letters IRL, which stands for in real life. This is actually in reference to a social media app of the same name. In Real Life is an app similar to Tinder, in that it aims to connect people online so that they can make plans for offline excursions. Clicking on the link in the text will send you to the store to download the app. “Easy and fun to send and receive invites to hang out with friends in real life,” it says on the homepage of the app.

If a person with the app invites a friend in their contacts, they will receive an unsolicited text message.

The internet is no stranger to predators seeking out potential victims for sex trafficking. Social media sites such as Instagram and Facebook allow predators to personally message unsuspecting teens. The media groups Gizmodo and Snopes both reached out to IRL about the accusations of their text messages being linked to sex trafficking and a spokesperson told them that the rumors were “incredibly false.” Snopes asked IRL if the supposed information as mentioned in the tweet could be obtained through one clicking on the link. They said, “Absolutely not, and to my understanding that is not even technically possible. A person has to grant access via iOS and Google permissions.