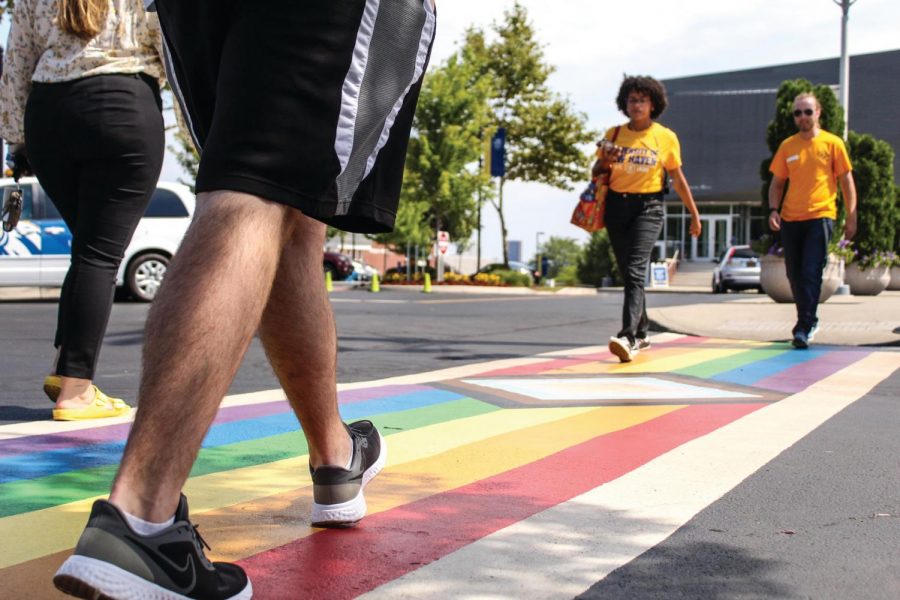 On Aug. 11, the Undergraduate Student Government Association (USGA) announced the installment of rainbow crosswalks outside of Maxcy Hall via Instagram.

According to the announcement, USGA President Sofia Martinez worked alongside facilities and the Myatt Center for Diversity and Inclusion throughout the summer on the project. The announcement said, “USGA has always strived to support students of all identities, and this is one step of many that we hope to take to better support the LGBT+ community.” The post shows USGA members posing proudly on top of the new design.

Martinez said that this idea originated while she and her roommate and Orientation Coordinator Grace Beaulac were walking to her car over the summer. Beaulac said that with the repaved roads, a rainbow flag could also be painted onto the roads, as seen in some spots of New Jersey and New Haven.

“I decided this was a project I would carry out – our students were away for the summer,” Martinez said, “and I knew as their president, it was up to me to do the work and have the University not always put the work of DEI initiatives onto our students or RSOs.”

Martinez had Beaulac’s support throughout the entire process. Martinez said, “It was quite incredible to be working on this- for the best reasons.” She also worked alongside Associate Vice President of Public Safety Ronald Quagliani, Dean of Students Ophelia Rowe-Allen, Director of the Myatt Center for Diversity and Inclusion Carrie Robinson, Chief Facilities Officer Louis C. Annino Jr. and Vice President for Diversity and Inclusion and Chief Diversity Officer Dr. Lorenzo Boyd throughout the fast-paced planning.

“We met on Wednesday, Thursday it was brought to the facilities planning group, and Saturday it was painted!”, Martinez said.

The post has received over 360 likes on Instagram. Martinez said that there has been an outpouring of positive support from the University of New Haven community. She said the crosswalk has also provided a new photo opportunity as students have been posing on it with friends and family.

“It was amazing to have a community that supports this,” said Martinez. “To not be met with ignorance or unwillingness at any stage of this being done or after- I think that is just as powerful as having the crosswalks themselves. This university was nowhere near perfect when I came in, but the amount of growth that they have done in three years makes me really look forward to being an alum. I look forward to seeing how many students and families on campus see the crosswalk and understand that DEI work here is not just an option, it’s a promise.”

Martinez said that she is happy that USGA has played such a big role in helping the university improve upon its inclusion and belonging initiatives.

“The crosswalks won’t fix everything,” said Martinez, “but it is a good start of showing unbreaking support and solidarity of our LGBT and marginalized communities. Students will always see it, and tour groups with prospective students, and anyone who is interviewing for an administrative or staff position for the University; this is not a hidden or tucked away sign of this University’s promise to actively work on inclusion and belonging.”