University Shatters Goal at Up ’til Dawn 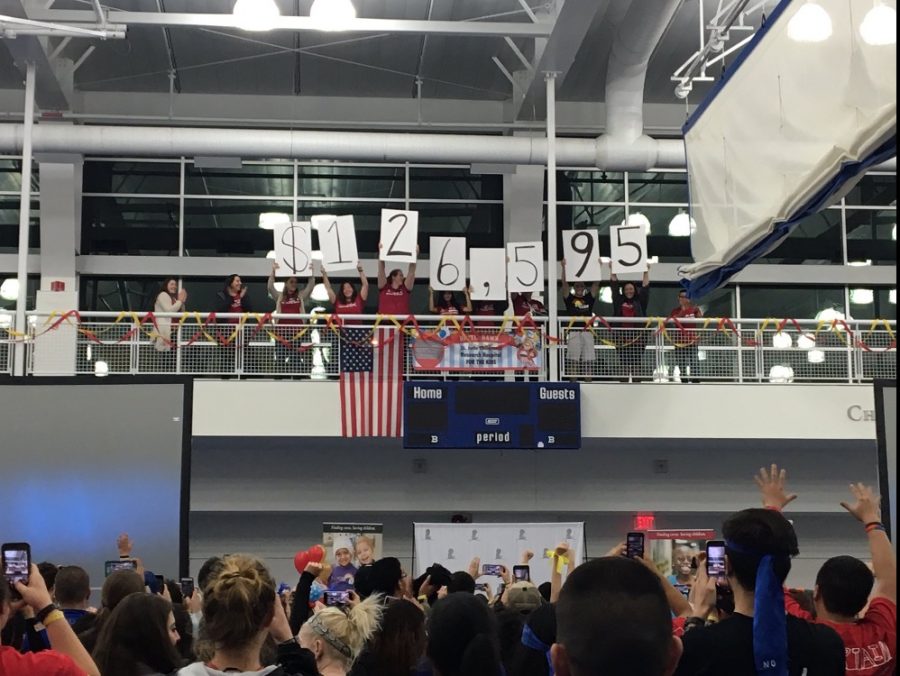 Fundraising for Up ‘til Dawn reached its peak with the finale Saturday night, as the University of New Haven raised $126,595 for St. Jude Children’s Research Hospital, becoming the second highest fundraisers in the nation.

Since last spring, the University of New Haven St. Jude Up ‘til Dawn E-Board has been hard at work planning this school year’s finale event. On Saturday, Feb. 25, their hard work paid off in a as they surpassed both the school’s record from last year, $114,157, and the goal set for this year, $125,000.

The entire e-board was exhausted following the event, but “overjoyed with the outcome,” according to executive director Rachel D’Ambrosio.

“Our goal this year was huge and we weren’t sure if we would be able to achieve it,” D’Ambrosio said. “Seeing the whole school come together to help us reach our goal was amazing and makes all of the hard work and effort so worth it.”

Upon entering the rec center Saturday night for the finale, it had been transformed to resemble a carnival, with images from Dr. Seuss books and drawings by St. Jude patients hung on the walls. A cotton candy and popcorn table could be found off to the side, with inflatable games on the multi-activity court.

Participants began to fill the rec center at 10 p.m. and a little after 11 p.m., participants began their quest to stay up for good in support of the kids of St. Jude. The night opened with the emcees, Brandon Miller and Catie Kittle, introducing the cause and explaining how the night would progress. The University’s regional representative, Kyle Dooley, also talked about St. Jude’s. She said that at the hospital, the University of New Haven is known by everyone due to our efforts every year at Up ‘til Dawn. Jessie Brownstein, treasurer of W.R.I.T.E. Poetry, read a poem written specifically for the event, and Monsoon Dance Crew performed a routine during the opening ceremony.

The first challenge, a relay, began around midnight. Team members broke off to five locations on campus to compete in different mini-games, that included a potato sack relay in the Alumni Lounge, basketball in the German Club, and three different games in sections of the Bartels dining area. Before you could compete in a mini-game, a question about St. Jude had to be answered correctly. The winner of the challenge was the team 4TK 3.0.

The second challenge was done in “superteams” made up of two to three teams of six. In this challenge, teams had 15 minutes to redesign the cover of the classic Dr. Seuss book they were assigned, relating it back to childhood cancer and the St. Jude’s mission. Judges from the E-Board picked 10 finalists who presented their book covers in front of everyone to decide the winner. The superteam of The Restless, Old, Tired Cadets and One Fish, Two Fish, Purple Fish, Gold Fish won challenge two.

The third and final challenge was St. Jude’s take on the game Ships and Sailors, titled Patients and Doctors. Participants had to follow instructions from Kittle and Miller, including “4 Patients Eating at Kay Kafe” and “Dr. Suess Is Coming!” The last person standing won for their team, and the winner was from the ROTC team, Marky Mark and the Funky Bunch.

Following this challenge, teams hung out, danced and ate breakfast before the closing ceremony began. Dooley took the opportunity to introduce a well-loved St. Jude’s patient through a video. Her name is Mabry, and she suffered from Acute Lymphoblastic Leukemia. She also has a bright personality and loves dressing up like a princess. Showing videos like this helped remind participants what they were staying up for.

Irene Sogotis is a senior who participated in her third Up ‘til Dawn this weekend. She says lessening the burden for St. Jude’s every year is the reason she keeps coming back.

“The most rewarding part is how much of a difference I see us making,” says Sogotis.

Overall winners were, in third place, Huffer’s Homies, in second place, Horton Hears A Crew, and in first place, Saturdays Are For The Kids.

As is tradition at the University of New Haven, all the participants took place in singing the “No Mo Chemo” song, a song that gets sung to patients when they go into remission. In the past, videos of our University community have been played at the hospital in Memphis.

Emotions ran high when the final total was announced, as the record had been broken and everyone was extremely excited.

D’Ambrosio says that surpassing the goal, “goes to show how amazing this campus is as a whole.”

“[Up ‘til Dawn] has shown me that if this campus is truly passionate about something, they will do anything in their power to raise money and reach the goal,” says Tori Baker, Up ‘til Dawn’s membership director.

Baker, a senior, has been involved with St. Jude’s since the freshman involvement fair her first year here. She says her time with Up ‘til Dawn has taught her “how our campus has many diverse groups that come together for this amazing cause.”

“We wouldn’t want to change a single thing about last night,” says D’Ambrosio.