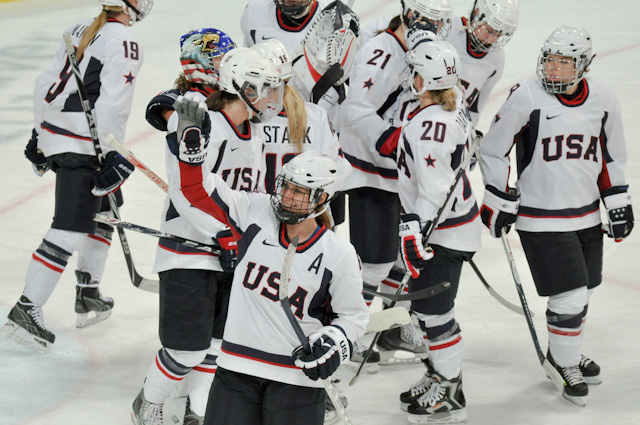 Nearly 20 years to the day after the United States Women’s National Hockey Team (USWNHT) won gold at the 1998 Nagano Olympics, they were golden once more, defeating neighboring rival Canada in a thrilling and close match. The gold medal returns to the United States, following four straight Olympic wins by Team Canada. The United States and Canada are still the only teams that have won the gold medal in the six Olympic tournaments to date.

The USWNHT has  been one of the most dominant national squads competing on the international stages, due in part to the amount of young girls who grow up playing. However, less than a year ago,, putting together a team with as much skill and power as this one has, was uncertain. To go from where they were in March 2017, to where they are now – Olympic gold medalists in February 2018, is remarkable.

After years of unbalanced support from their parent organization, USA Hockey, and wages so low they weren’t liveable, the USWNHT decided they would boycott the 2017 Women’s World Championships so ,USA Hockey might finally hear out and begin working toward progress in positive changes. Unions from every major men’s professional league, and some United States Senators, all voiced their support for the women’s team. When USA Hockey was reportedly looking for a replacement team, the existing team took to social media with messages of hope, positivity, bravery and what it means to be a role model, in a campaign that became known under the hashtag #BeBoldForChange. The hashtag became a mantra throughout the boycott, which ended just three days before the beginning of the World Championships.. The women saw increased salaries and benefits in both insurance and travel, plus a significant bonus if the team were to win an Olympic gold medal. USA Hockey announced the formation of an advisory group for women’s hockey, much like the one that Hockey Canada has had in place for years.

At the World Championships in 2017, they were golden for the sixth time in eight tournaments.

Fast forward one year, to February 22, 2018: the USWNHT is golden once again. The game itself was high intensity right until the very end. Going into the third period, the score was 2-1 in favor of Canada. Thanks to a late goal by Monique Lamoreux-Morando, the game ended tied. To overtime they went! 20 minutes could not solve the stalemate, due, in part, to excellent goaltending on both ends. Shannon Szabados, the Canadian goalie, is a two-time Olympic gold medalist with an impressive career beyond the Olympic tournaments. Maddie Rooney, in goal for the Americans, is a college junior playing D1 hockey.

The shootout was how this game was going to end. Five rounds were not enough, so it went to sudden death, and Jocelyne Lamoreux-Davidson (the twin sister of Lamoreux-Morando) scored the medal-clinching goal, with a dazzling move she calls the “oops, I did it again.”

Overall, it was the kind of hockey game that could turn someone into a believer that women’s hockey can be just as, if not more, exciting than men’s hockey.

Despite all of the highs, it is still valid to be concerned about where to go from here. If March 2017 proved anything, it’s that boldness and the drive to make a difference can and will encite change, but this Olympic victory can’t be where the change stops. Constant forward progress is what will keep this conversation going.

But for now, we celebrate an exciting victory that came out of an equally exciting women’s tournament.