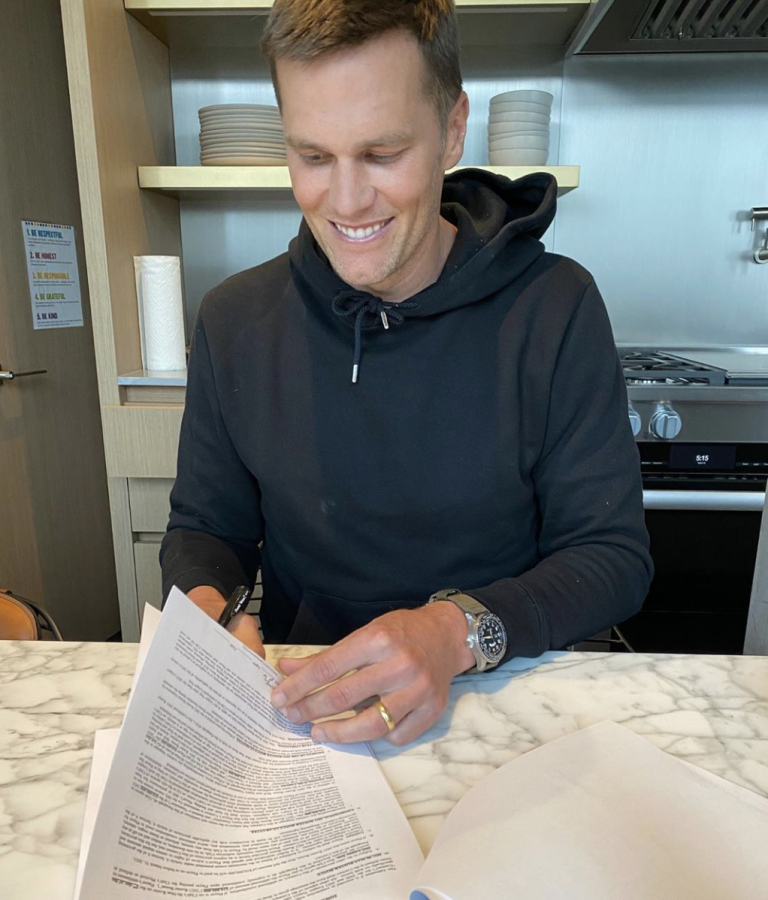 Tom Brady signing his contract to the Tampa Bay Buccaneers.

Last week, Tom Brady announced he will leave the New England Patriots. Brady posted two statements across his social media accounts: one addressed to his team, Coach Bill Belichick, and the Kraft family, and the second to Patriots fans.

Brady said, “I wanted to say thank you to all of the incredible fans and Patriots supporters. MA has been home for twenty years. It has truly been the happiest two decades I could have envisioned for my life and I have nothing but love and gratitude for my time in New England.”

Brady was drafted in 2000 from the University of Michigan. He played with the Patriots for 20 seasons and helped the team win six Super Bowls. Many football fans thought that Brady would retire, as 42 is considered retirement age in football, but Brady put those rumors to rest in August when he did not re-sign with the Patriots. This opened him to free agency, meaning he could sign to another team.

While Brady confirmed he is leaving the Patriots, his original statements did not say which team he was joining. It was not until Friday that he confirmed he was signing with the Tampa Bay Buccaneers. In an Instagram post, he showed a photo of him signing the contracts and said, “I’m starting a new football journey and thankful for the Buccaneers for giving me an opportunity to do what I love to do. “

Following the announcements, Patriots players and hundreds of fans took to social media to express their gratitude for his time and sorrow over his departure.

Patriots chairman and CEO, Robert Kraft, said, “There simply will never be another Tom Brady. I now look forward to the day we can bring him back home to New England to celebrate his Patriots career, his endless achievements and his legacy as the greatest of all time.”

Although Brady will not be going into his 21st season as a Patriot, fans are eager to see what he does next.