The King Is Back

It’s been almost a year and a half since the passing of the King of Pop, Michael Jackson, but the material he left behind is keeping him more alive than ever. After the s 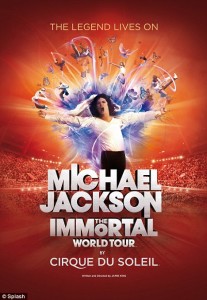 The official poster for Cirque du Soleil’s “Michael Jackson: The Immortal World Tour.”uccessful This Is It film and accompanying soundtrack released a year ago, the releases coming out in time for the Christmas market are going to be more exciting than ever.

The first of these releases, arriving on November 22, is a 3-disc DVD set entitled Michael Jackson’s Vision. The set will include all of MJ’s legendary and iconic music videos (or “short films” as he referred to them) for the first time ever. The most exciting part of this set is the inclusion of many videos never before released on DVD, including three from his days with the Jacksons, but also the never before seen video for “One More Chance.” There truly is no better collection of music videos…ever. For any admirer of his visual work, please take my word for it that this is well worth every penny.

In addition to Michael’s videos, he was renowned for his groundbreaking and record-setting world tours. Cirque du Soleil is putting together “Michael Jackson: The Immortal World Tour,” which will obviously be an MJ-worthy spectacle. Cirque describes the show as “a riveting fusion of visuals, dance, music, and fantasy that immerses audiences in Michael’s creative world and literally turns his signature moves upside down.” The show promises to please both life-long fans as well those who haven’t experienced his work before. North American dates for the tour have been released (starting in the Fall of ’11) and tickets are available now. They can be purchased through Cirque du Soleil’s website (www.cirquedusoleil.com). There is no word as to whether there will be an accompanying soundtrack, but the show itself will no doubt be unbelievable.

However, the most exciting upcoming MJ release comes in the form of a brand new studio album entitled MICHAEL, due for release December 14. The album is set to feature between 10-12 tracks of songs Michael recorded before his death between 2001 and 2009. While the exact tracklist is unknown, Jackson had been working with everyone from Akon to RedOne before his death. One confirmed track, “Breaking News” is being released as a promotional track and will be streamed on www.michaeljackson.com for this entire week. The album’s first official single is yet to be announced. While this is obvious controversy surrounding the release, (when isn’t there with Michael Jackson?) this is something the world has been waiting for and considering who made the songs, it’s safe to say it won’t disappoint.

The death of Michael Jackson certainly hasn’t stopped the expansion of his legacy, and the upcoming months are without a doubt going to be an exciting time, not only for his fans but for the music world as a whole.