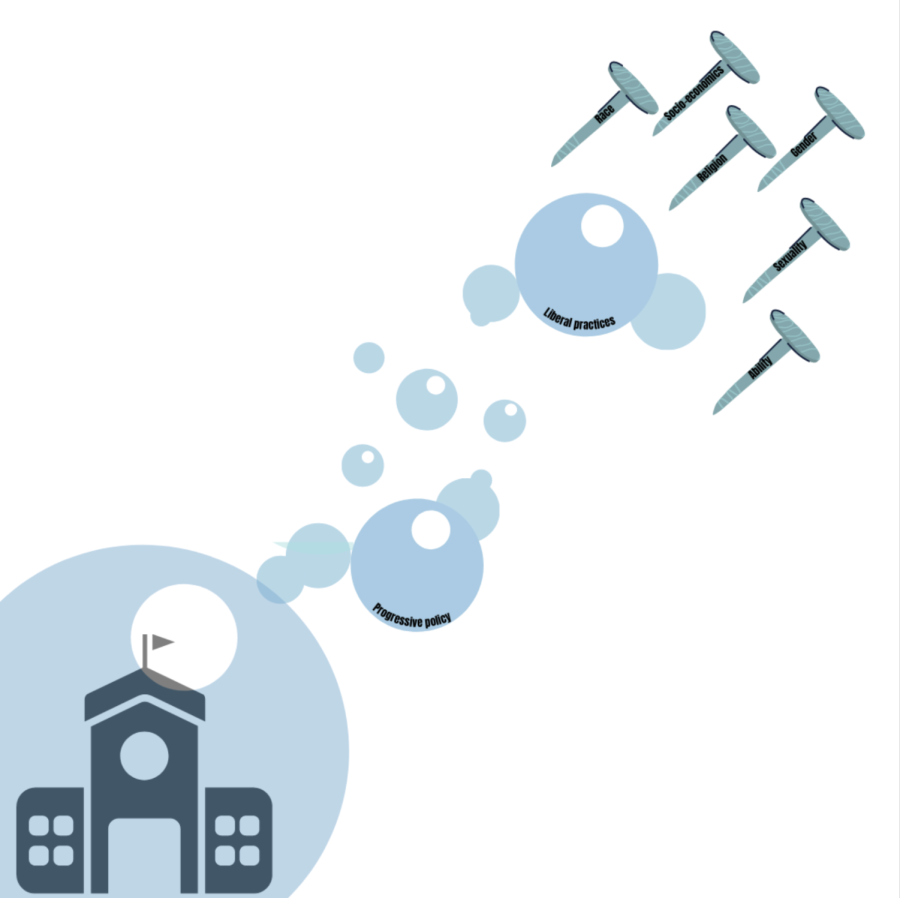 As the political climate in the U.S. becomes increasingly polarized, people are questioning whether college campuses create a bubble that skews individuals’ perceptions of progress and societal views. Because of a cultural shift, many colleges have started to posture as progressive and liberal spaces. Although there are some aspects of campus life that are more progressive than outside society, those aspects do not mirror actual societal progress, or the attitude of all college students, and students understand this.

The notion that college students aren’t aware of the world around them feeds into the narrative that Generation Z is self-obsessed. Even on college campuses, there are students who do not adhere to the same values that you or the college has; college students are not a monolithic voice.

There are dangers of the college campus: echo chambers. They can lead to constant reinforcement of preexisting ideas without challenge, thus deluding individuals’ perception of society. Not having open dialogue or reaching out to the community exacerbates this, but these isolated instances are not indicative of the critical thought apparent on campus.

Students are cognizant of opposing ideals. The concept of a collegiate bubble also furthers the narrative that college shields all the bad things that happen in society. This is disingenuous because that implies students are not able to think critically about the campus and the world they live and work in. No one is going to think that just because you have Diversity, Equity and Inclusion (DEI) policies on campus, DEI programming, the outside world is going to hold the same experiences and liberal practices.

Even if the bubble did exist, it would not cover all members of the university community. For Black students and those in other marginalized communities, it would be almost impossible for them to relish these policies as they do not protect from systemic and institutionalized discrimination and hate. Even if colleges tout themselves as bastions of liberal thought to the point of farce, there is an obscene amount of bias incidents that get reported and have nothing come of it.

One University of New Haven upperclassman recounted the time a group of white students wrote the N-word on a door and how traumatic it was for them to see that when this is supposed to be a safe space. The police got involved, but no one faced any consequences. When a similar instance happened again this year, the same upperclassman said that it happens almost every year and the involvement of the police is just to save face. The furtherance of the bubble narrative invalidates the ongoing hardships faced by marginalised groups on campus.

On the other hand, white people are susceptible to this delusion of societal progress. They champion the messages of inclusion and equity mindlessly and don’t think about how these concepts translate into the real world where people are fighting for their lives. It’s performative and insulting, especially when they try to act as leaders on topics they have no experience with. Their privilege has allowed them to go unscathed by the horrors of the world so they cannot fathom the harsh realities that marginalized people face; to them it is viewed as a campus complaint. In their mind, the “progressive” nature of campus is indicative of actual society. They don’t take note of other communities, their struggles or ways of life. Inevitably, they will leave university and nothing for them will have changed.

They will be trapped in a cyclical thought pattern that shields them from the truth and leads them to believe in fallacies about societal progress, but for everyone else, they never had the reprieve of a collegiate bubble.