The Bells of Notre Dame

For fans of Disney’s animated film The Hunchback of Notre Dame, the studio cast recording of the new musical is a real treat.

You may be thinking: I didn’t know that Hunchback had been rewritten for the stage. You probably wouldn’t be the only one. The musical premiered in America for the first time in late 2014, at the La Jolla Playhouse in California and opened to extremely positive reviews. In April 2015, the entire production transferred to the Paper Mill Playhouse in Millburn, New Jersey. There hasn’t been much on the future of this production, but the cast album is a magnificent remembrance of the two productions.

Based on the 1996 film, original lyricist Stephen Schwartz (Wicked, Pippin, and Disney’s Pocahantas) and composer Alan Menken (Disney’s The Little Mermaid, Aladdin, and Newsies) set out to revise what they had written for Disney. Using a new book by Peter Parnell, and a few new songs, this brand new musical version of Hunchback was darker than the animated feature that had come years before it. While keeping songs from the original film, the story became truer to the story in Victor Hugo’s novel.

The opening song of the album (Olim) is sang by a 32-person choir, entirely in Latin. Olim is seamlessly followed by “The Bells of Notre Dame.” “The Bells” is also the opening song of the Disney film, but it has been expanded to include Frollo’s backstory, including the reason he must raise his nephew, whom he names Quasimodo, to mean “half-formed”. The ensemble tells the story, addressing the audience. Patrick Page, who plays Frollo, brings so much power to the role, and though you can’t visually tell by watching him, it’s evident in his voice.

The next song, “Out There,” is another one that’s familiar from the movie. It takes place roughly twenty years after “The Bells,” and we see (well, hear) Quasimodo grown up. He is played by Michael Arden. Arden does a fantastic job at portraying Quasimodo’s pain in his voice, despite the slur in his voice Quasimodo is deaf in Hugo’s novel, and Arden incorporated that into his portrayal – on stage, he communicated through strangled speech as well as a form of sign language he used for himself. Arden himself is a frequent collaborator of Deaf West Theater, is fluent in American Sign Language, and has just come off directing Deaf West’s Spring Awakening on Broadway.

The scene that follows is the Feast of Fools, outside of Notre Dame. In “Topsy Turvy, pt. 1,” Clopin (Erik Lieberman) introduces the feast. “Rest and Recreation” introduces ex-soldier Phoebus (Andrew Samonsky), and “Rhythm of The Tambourine” is the first time audiences see the gypsy Esmerelda (Ciara Renée) as she dances for the crowd. It’s an upbeat section of act one.

Renée shines in her big solo, God Help the Outcasts, and it’s followed by the equally beautiful Top of the World, a duet between Renée and Arden, when Esmerelda finds Quasimodo at the top of Notre Dame.

At the end of act one, “Heaven’s Light,” sung beautifully by Arden, is contrasted with Hellfire, a showstopping number by Page – Frollo, who is anti-gypsy, seems to be unable to stop thinking about Esmerelda. The act one finale, Esmerelda, solidifies what has been shaping up to be a love quadrangle – Quasimodo, Esmerelda, Phoebus, and Frollo.

The ending of this new version of Hunchback is completely different from the way the Disney film ends. It’s darker, sadder, and overall not the happy ending that Disney makes you think the story has. It’s more along the lines of what Hugo had written in the 1800s. Without giving up much about act two, I will say this: “Made of Stone” is Arden’s true shining moment at the bottom of act two. If you only listen to one song from this entire recording, make it “Made of Stone.” 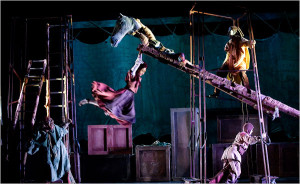 The Hunchback of Notre Dame cast recording is up there with some of the best cast recordings of recent years. There is so much in it that makes up for the visuals being missing. It does a fantastic job of standing alone and really speaking for itself, and the all of performers included on the album, particularly Arden, Page, and Renée but not limited to just those three, do such a fantastic job of conveying an array of different emotions depending on what it is the song calls for; that’s really important, and one of the many reasons why this cast recording deserves a listen, especially if you’re familiar with the original work.