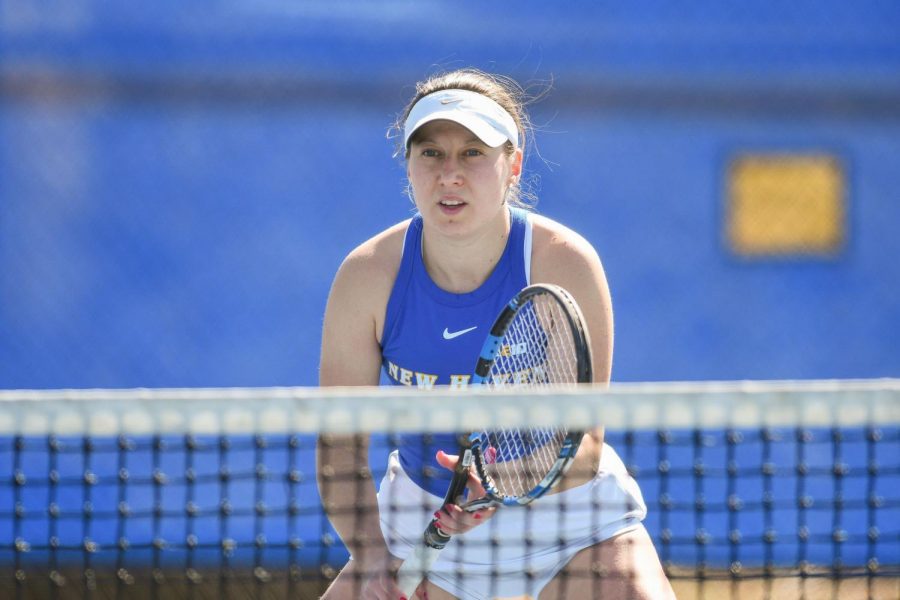 On March 21, New Haven made a comeback from three points down, taking a 4-3 victory over the Big East’s Providence College for the team’s first season win against a Division I (DI) opponent under head coach Hannah Still.

Sunday’s victory was also the first win over a DI opponent since beating Holy Cross in the 2017-18 season. The match was played under 5-v-6 International Tennis Association (ITA) Rules, meaning each of the seven matches played would count for a point in the final box score.

New Haven dropped both doubles matches to open the afternoon with the Providence Friars taking the first, 6-3, and the second, 6-0.

Moving to singles play, senior Lilia Rodriguez earned the first point for the Chargers with a straight-set victory at fifth singles, 6-1, 6-1. New Haven dropped the second singles match and needed to sweep the remaining three matches to win the day.

Sophomore Kacie Banks was next to finish, taking down her opponent in straight sets, 6-2, 7-5, leaving the first and third singles matches left to play.

Junior Nicole Mika took to the court in the third singles bout, dropping the first set 6-0 before coming all the way back to win the second and third sets 6-4 and 6-2, respectively. Mika’s win brought the Chargers and Friars level, with the first singles match deciding the victory.

Graduate student Ivana Andric took the first set of the first singles match-up 6-4 before going down 6-1 in the second. In the deciding set, Andric pulled out a 6-4 win and secured the first victory of the season for the Blue and Gold.

Next up, the Chargers will play their second straight at the New Haven Tennis Courts on Wednesday, March 24 when they host Stonehill College. The first serve is scheduled for 3:00 p.m.