Hamilton is currently the most talked about show on Broadway. Everyone seems to be trying to get those coveted tickets to end up in “the room where it happens.” Brandon Hudson is a swing in the show; a swing is similar to an understudy, but for members of the ensemble or chorus. He’s been in the room where it happens, seeing the show anywhere between 70 and 80 times from the audience. 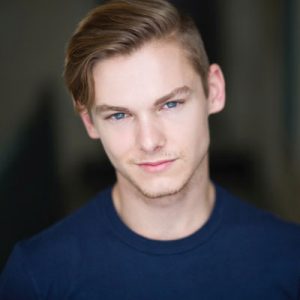 Angela Tricarico: Where did you grow up? Did you have experience with theater from a young age, or did you start dancing first? What was your access to Broadway like?

Brandon Hudson: I grew up in Pekin, Illinois. It’s a tiny town outside of Peoria, Illinois. Most people know Peoria for the old 1920’s saying, “Will it play in Peoria?” I didn’t have experience in theater, in fact I was an Art and Sports kid. We had no Broadway shows, really. Well, I didn’t see any. I didn’t begin dancing until a lot later in life.

AT: I know that Hamilton is your Broadway debut, but have you participated in regional theater, and has that prepared you well for Broadway?

BH: I have only done one regional gig, which gave me my equity card. It was at the St. Louis MUNY, in West Side Story. I was cast in that because I had just gotten off the international tour of that about three months prior.

AT: What was your audition process like for Hamilton? When did you join the production?

BH: Well, it spanned quite a while. From The Public Theater, to Pre-Broadway. So, over a years’ time, or so. I joined in September 2015, about a month after opening.

AT: Since you’re a swing, you obviously cover a bunch of tracks. Which ones do you cover, which is your favorite, and which did you make your Broadway debut on?

BH: I am a swing! I cover six tracks, but I usually only go on and have only ever been on for one — Samuel Seabury. So, that’s my favorite and that’s also the one I made the debut on. It’s kinda crazy because I’ve never even sang a full solo on a community theater stage, let alone a Broadway stage. *Pinch me*

AT: What is a typical day at Hamilton like?

BH: For a swing, we’re always on edge because we never know who’s in or out. We sit waiting for our phone to vibrate and then put our thinking caps, depending on who we’re on for. But, other than that, it’s fun. Good people.

AT: What’s the most memorable backstage moment you’ve had so far?

BH: I think my most memorable moment was ONSTAGE! On the night I had my debut! I was finishing the “10 Duel Commandments” where *SPOILER* Phillip is shot. I turned around, was in the wrong spot and ran straight into Betsy [Struxness, ensemble], grabbed her and screamed in her face then ran off stage. I think to date, that is actually the FUNNIEST moment I’ve ever had on stage!

AT: How does it feel to be a part of the biggest show of the season, and possibly of this decade? Did you know going into it the scope of how big and important this musical was?

BH: I had no idea, and now we have a Grammy. Its nuts. It’s amazing. It’s humbling to know that hard work does pay off.

AT: On Twitter, Lin-Manuel said you remind him of Ryan Steele (Steele is a Broadway dancer who has appeared in West Side Story, Newsies and Matilda). What do you think of this comparison? In other words, how did it feel to be compared to someone great by someone great?

BH: It’s a good feeling being compared to someone so amazing, and by the boss man no doubt. I hope my career picks up like his!