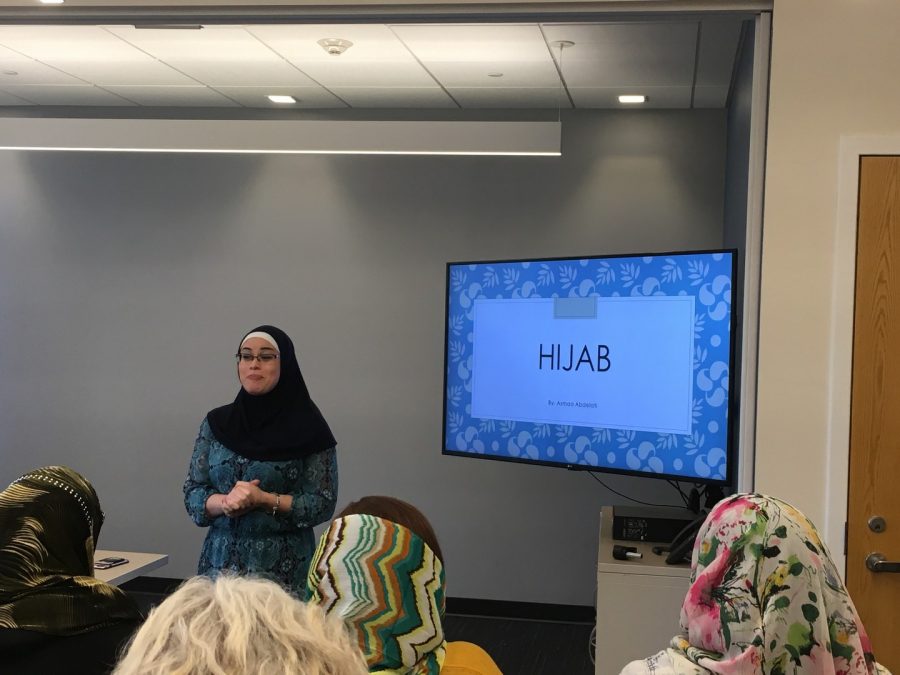 Wednesday (March 29) night, in the Myatt Center for Diversity and Inclusion, speaker Asma Abdelati presented her event ‘the meaning of the Hijab to the University of New Haven.

The United States politics have had a tumultuous effect on relationships between people of Islamic faith and those of other religions in the nation. Several incidents, such as the travel ban on several countries, a rise in hate crimes towards people from the Middle Eastern decent, and paranoia about Muslim culture have made peace rarer, with little attempts to mend the wounds. This is why the University’s Myatt Center of Diversity and Inclusion, and speaker Asma Abdelati, sought to bring people together to learn more about an important symbol of the Islamic faith and celebrate its wonderful women.

The event was a peaceful presentation to explain the true meaning behind the Hijab, a headscarf worn by Muslim women on a daily basis. The event was part of the final week of Women’s History Month and celebrated the uniqueness of powerful women in the Islamic faith. The event provided a better insight to what it meant to wear a Hijab, and the audience themselves got to take part by wearing Hijabs themselves. The first 25 attendees were given scarves to wear and be a part if the experience, and several teachers and students were able to wear theirs’ and enjoy the opportunity.

“People I am close to are Muslim, and I’ve worn a Hijab before,” said one student at the event. “Hijab Day was to be informative about the hijab and why women wear it.”

The event offered a space to learn more about the important aspects of the Islam religion. Ms. Abdelati started the presentation with an explanation about what the hijab truly means. “Hijab” itself means “to cover” or “to veil,” and there are several different kinds, ranging from covering only the hair to covering the entire face.

Muslim women see the Hijab as an obligation to their God. The Qur’an explains it as a form of respect; to ensure the moral boundaries between unrelated men and women. Unlike what some might think, several women see wearing one as showing their belief and pride, to them, it gives them a strong sense of freedom.
Unfortunately, this pride has not always been accepted by others, and many women have faced harsh discrimination at the hands of those who look down on Islam. The presentation transitioned into these hardships, and how political heat has caused large backlash and discrimination, ranging from disgusted looks to being called terrorists and ordered to return to their country.

This anger, however, is not permanent and one’s opinion can change over time. The show highlighted how ignorance and hatred can be quelled through learning and keeping an open mind. An amazing example comes from Ms. Abdelati herself, who gave her entire school a presentation about her religion when she began to wear her hijab in middle school.

“I felt proud, I felt accepted,” Ms. Abdelati said when she told the audience about what it was like after presenting to her school, “I felt happy, like a family.”
Abdelati wrapped up the event with great big bow by listing several amazing Muslim who wear their hijab with pride. From one of former president Obama’s closest advisors Dalia Mogahed, to Nadiya Hussain who won “The Great British Bake Off,” to Ibtihaj Muhammad who had the honor of being the first female Muslim American fencer. Each of these ladies represent their religion with pride and show their incredible authority and power, with more of them coming into the spotlight everyday.

“World Hijab Day” allowed for University of New Haven’s staff and students to come together in a peaceful environment to understand more about the religious world around them. It gave the chance to understand that this symbol of religion is not a target for a hatred, but a sign of pride and freedom to women.