Should the devious licks trend lead to discipline or detention? 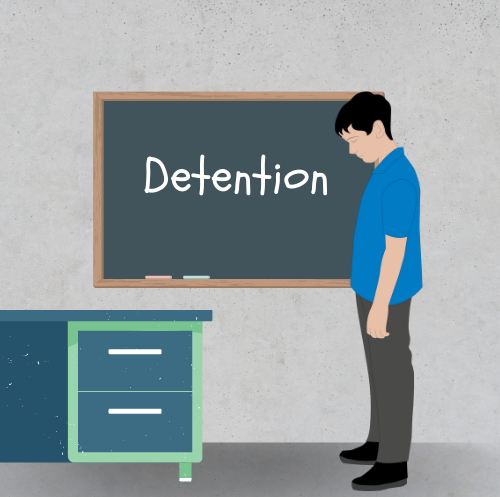 If you’re active on the social media app TikTok, you may have come across a challenge turned trend coined “devious licks.” The challenge involves the user recording themselves stealing items of value from their schools. The first occurrence came from the user @jugg4elias who posted themselves stealing disposable masks from their school’s bathroom, which has led to other objects being stolen from schools around the country. The caption of the post read, “A month into school absolutely devious lick.” The trend’s name is derived from the slang phrase “hit a lick,” which implies getting something of value quickly.

The vandalism and theft-based trend has made its way across America to parts of Canada and Europe. More recently, it has found its way to local Connecticut schools in Fairfield and Hartford counties. Darien High School reported incidents related to the trend that consisted of vandalism. According to one USA Today article, most of the response has been teachers and school administrators begging for parents to monitor what their child looks at but also escalated to students being charged and fined.

According to USA Today, nine students from Marion County Public Schools in north Florida were arrested for incidents including hand dryers and paper towel dispensers being pulled off the wall and destruction of a urinal, school officials said.

While monitoring may work in theory, in reality, it likely won’t stop children from influencing each other’s behavior in person, without the mode of social media.

TikTok began removing videos featuring the trend, and the original “devious licks” video was removed on Sept. 13. The trend has been banned by the app since Sept. 15 for violating TikTok’s community guidelines. The “devious” hashtag has over 235 million views.

There is a counter-trend emerging called “angelic-yields.” According to Insider, this acts as a direct response to the devious licks trend. A user named @j.uher7 posted an “angelic yield” video which showcases the user returning the items that they stole from their schools. Another form of participating in the trend includes bringing gifts to public places like bathrooms. While this is perceived as a positive alternative to the negative influence that the devious licks trend has, it goes to show how simple it is for kids and young adults to do things they wouldn’t ordinarily do.

This proves through the social learning theory that social behavior is learned by observing and imitating the behavior of others. Children are mimicking the bad behavior they see their friends doing just due to how widespread the online trend has gotten.

There is no clear-cut way to prevent vandalism and stealing at school other than beefing up school security, or making stricter disciplinary protocols such as instituting in-school detentions, suspensions or taking away internet privileges in school. You can’t control the consequences for what a student does outside of school and most school systems in general don’t have the means to enforce monitored usage of the internet. The only way to stop bad behavior is to not encourage bad behavior; and that, of course, starts at home.