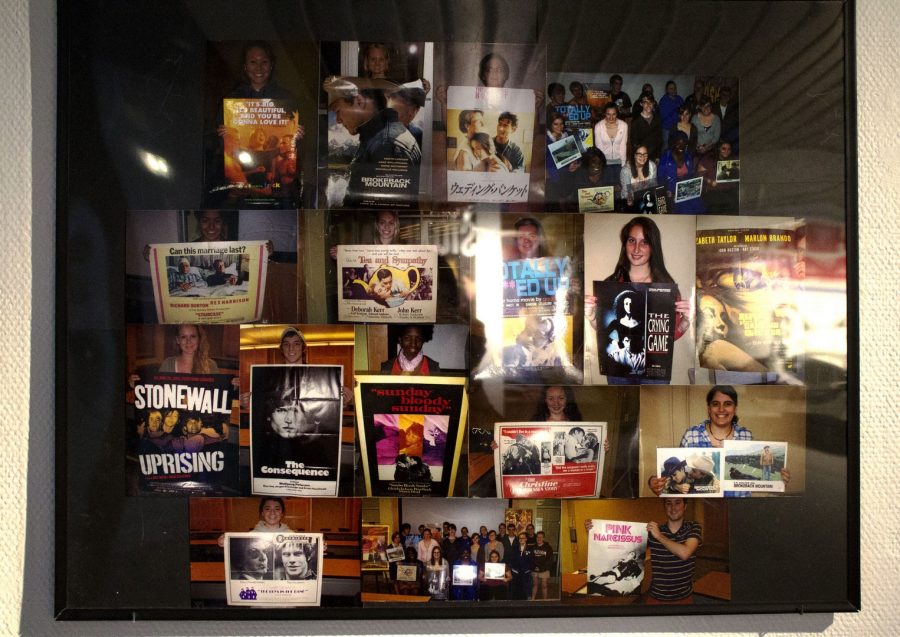 “Anything that’s worth doing is worth overdoing.”

That is a quote adjunct professor Wes Davis attributes to himself. It can also describe the current show on display in the Seton Art Gallery at the University of New Haven. “LGBT Movie Poster History and Iconography” covers the history of LGBT cinema in images – from its roots, to where it is now.

The show officially opened on Thursday, April 6 with a talk from Davis to guide attendees through the sections he has outlined in the room.

First, College of Arts and Sciences Dean Lourdes Alvarez spoke. She said the show chronicles a whole history of sexuality and loves that “dare not speak their name.” She stated that progress has been made, using Ellen DeGeneres as an example, and that even more progress has been made in recent years, where sexuality is no longer the central point in a film that may feature LGBT characters.

Davis began his talk with two quotes, the one mentioned above, and “too much of a good thing can be wonderful,” courtesy of Mae West.

The show, which features 134 pieces, is the largest the gallery has ever had. All of the pieces are from Davis’ personal collection, which he started 25 years ago. Davis also collects film posters from horror and sci-fi films; in past years, he has done gallery shows on both of those film genres as well. Davis is also well known for his collection of Beatles memorabilia.

The show, Davis said, is dedicated to Vito Russo, whose book (and eventual film) The Celluloid Closet, is an extensive history of LGBT films and characters.
Upon entering the gallery, the first posters are for films about Harvey Milk, a well-known LGBT figure, and Stonewall, an icon of the LGBT rights movement. There is also a standing closet exhibit, with a poster for The Celluloid Closet inside.

The rest of Davis’ collection is split into categories, describing the films or the actors in them. The first one, In The Closet, features actors and actresses from old Hollywood who were, or were speculated to be, gay – Rock Hudson, Montgomery Clift and Cary Grant are just a few. This section also has a lobby card from “Bringing Up Baby,” the first film where the word “gay” was said and meant to mean what it does today.

Exploitation and Underground has posters from films that most people don’t know of. They’re very risqué compared to the other posters Davis has hanging.
Coded Images are ones from films made during the era of production codes. Explicitly LGBT characters and scenes were forbidden under these codes, but through the art of allusion, many films were still able to convey their points. Scenes from Ben-Hur and Spartacus are in this section.

“Imagine you couldn’t see yourself at all, or if you did, you died at the end,” is how Davis prefaced the section titled Gay Necrology, or, films where the gay characters die at the end, no matter what.

The Way We Aren’t follows Gay Necrology, because though the production codes had been lifted and LGBT scenes were now allowed, gay characters still often killed themselves by the end of the movie.

AIDS Cinema, and The Way We Are both move towards more modern cinema. Coming of Age is a subgenre of LGBT Film, where there are happy endings and couples that stay together through the end of the film.

The gallery show was put on in conjunction with an honors class currently being run at the University of New Haven: Contemporary LGBT World Cinema, taught by Davis. In the class, over 30 countries are being represented and all by 2 films from 2000 and after. Students from the class helped with the organization and set up of the gallery.

Davis ended his talk with a quote about the progress the film industry has made so far: “we must not become complacent, we must not repeat the past.”
LGBT Movie Poster History and Iconography is running at Seton Gallery through April 20. Davis is available to give guided tours of the show if requested.