The Charger Bulletin • May 4, 2022 • https://chargerbulletin.com/secrets-revealed-who-is-the-cat-by-forest-hills/

Secrets revealed: Who is the cat by Forest Hills? 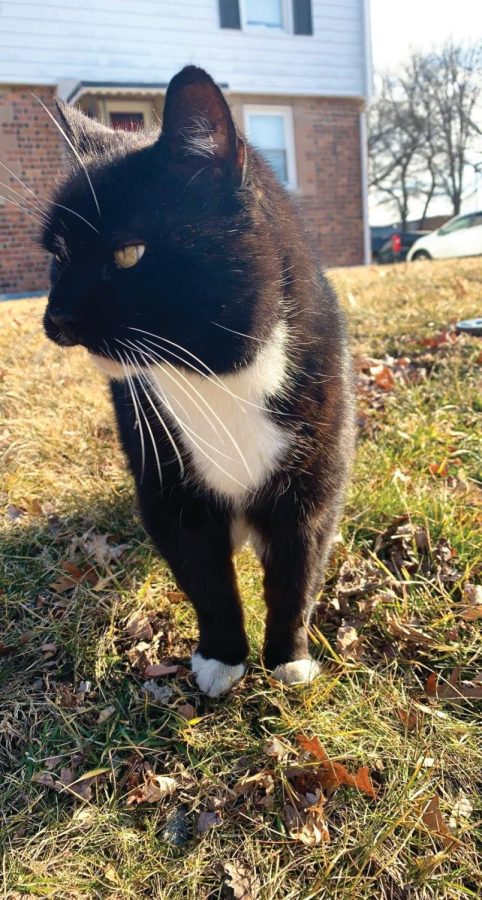 Bob’s Cat stands outside of his house, West Haven.

A sociable tuxedo cat has been recently roaming the streets of Simon Place looking for attention from University of New Haven students. However, most students do not know who the cat is, or where it comes from. Many have noticed that it will walk the streets and trot behind different groups of students on their ventures back to the Forest Hills Apartments from campus.

“Bob’s Cat” the mysterious emotional support animal for Forest Hills residents, does not actually have a name, but the feline does have a place in every student’s heart.

Some students have tried to figure out more about the cat’s background. Sophomore Corinne Quaglier, a criminal justice major and resident of Forest Hills, calls the cat “Mittens.”

“At first, I thought it was a girl, but then one day I was driving by and he was in a driveway, you know, getting frisky with another cat so I found out that he’s a boy. That’s really all I know about him,” Quaglier said. “He’s a little skittish. I like to stop and pet him if I have time, even if I don’t have time, he’s like an emotional support cat.”

Ever since the first sighting, students have been raving about the cat. Some have even made up different names for him. They look forward to the days where they can stop and give the fluffy cat some well-deserved attention, with no recollection of who he actually is.

“I call the cat Mittens, but everyone else calls it Whiskers,” said Skylar Galvez, a sophomore criminal justice major and Forest Hills resident.

Galvez said she only sees the cat on the strip from Ruden Street to Forest Hills. The farthest she has ever seen him is at the stop sign before the edge of campus and Westside Hall.

Carlos Rivera, sophomore history major and Forest Hills resident, recently uncovered the truth behind the cat’s mysterious sightings. “I met the owner of the cat walking back from Forest,” said Rivera.

He was walking back to his apartment, wearing his ROTC uniform, when he was stopped by a neighbor. A man known as “Bob, the Veteran,” according to Rivera, stopped him to talk about his experiences in the army. Rivera noticed the cat was on the porch of the man’s home and asked him if the cat was his.

“He said that he’s had the cat for years,” said Rivera. “I asked him, ‘why don’t you keep the cat inside’ and he said that he can’t contain the cat inside and that it likes to roam free. The cat is really nice, everyone knows the cat, and no one tries to hit it or steal it, it just does its own thing so it’s okay.”

Rivera asked what the cat’s name was, and the veteran said that it didn’t have a name. However, the owner’s name is Bob, so he said that makes the cat’s name, “Bob’s Cat.”

This cat is different from the rest around the Forest Hills area. This part of West Haven is a home to countless skittish cats who roam about random backyards that don’t appear to be their real homes.

Officials say that the state’s feral abandoned cats are on the rise. Laura Burban, the Director of the Dan Cosgrove Animal Shelter in West Haven, says that inner cities tend to see more stray animals outside because of apartment complexes and units that people move out of and abandon their pets. Just a few miles away, Karyn Putney, a volunteer at Dan Cosgrove Animal Shelter in Branford, said she recently trapped a group of feral cats being fed and sheltered behind a restaurant.

Rest assured, the mystery cat of Forest Hills does in fact have a home.