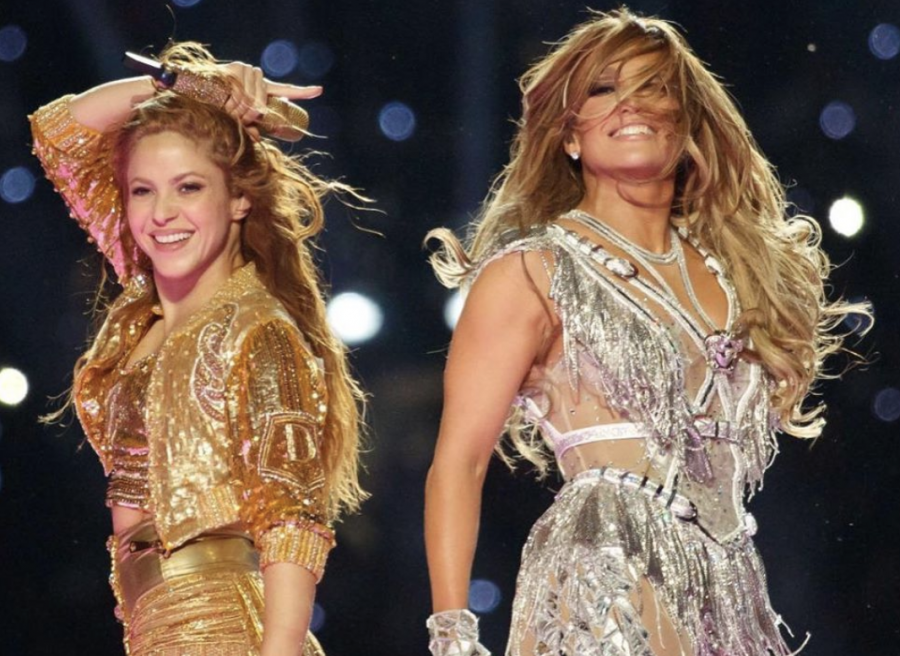 Shakira and Jennifer Lopez during the Super Bowl Halftime Show.

After facing criticism for last year’s Super Bowl halftime show, the NFL stepped it up by recruiting superstar Latinas Jennifer López and Shakira to perform at Hardrock Stadium in Miami, Fla.

Shakira began the set with a fiery dance routine and an array of her chart-toppers while giving it an additional Puerto Rican flavor when she welcomed trap and reggaeton singer Bad Bunny to the stage to sing his verse on Cardi B’s “I Like It” accompanied by trumpet fanfare and Shakira’s own hit “Chantaje.”

As Shakira crowd-surfed to another one of her hits, “Hips Don’t Lie,” López strutted out singing “Jenny from the Block” and showed off the pole-dancing skills she picked up from her movie “Hustlers.” While singing her catalog of hits, along with a sample from Columbian singer J Balvin, López did not fall short when it came to showing off her Latina roots in her dance moves.

Toward the end of the show – during López’s set – the lights and the music faded to reveal white, lit-up cages that held children inside of them, and among them was López’s daughter Emme Maribel Muñiz, 11, who sang a stripped-down version of her mother’s “Let’s Get Loud.” Behind Emme and the rest of the cages was a crowd of little girls dressed in white and holding each other’s hands, forming a human wall.

To the naked eye, this halftime show was a remix of Shakira and López’s greatest hits with exuberant dancing, special guests, and sexy salsa dancing. However, it was more than that. This was a nod to the political climate that shuns ethnic diversity and the existence of immigrants and Latinos in the United States. The cages in Lopez’s set referenced the Trump administration’s practice of keeping immigrant children in holding pens without their parents.

When the performance began to gain energy and tempo, Emme joined her mother, who was wearing a feathered cape with the United States flag on one side, and the Puerto Rican flag on the other. While singing Bruce Springsteen’s “Born in the USA,” López showed off the Puerto Rican side of the flag as if to remind viewers that Puerto Ricans are American citizens. President Trump has criticized Latinos and Latino-Americans since before he took office and this was López’s way of putting her foot down.

The performers closed the show with Shakira’s “Waka Waka (This Time for Africa)” in an energetic dance sequence. These two superstars were able to hold their own on one of America’s harshest stages. This show had a purpose that was very much fulfilled.