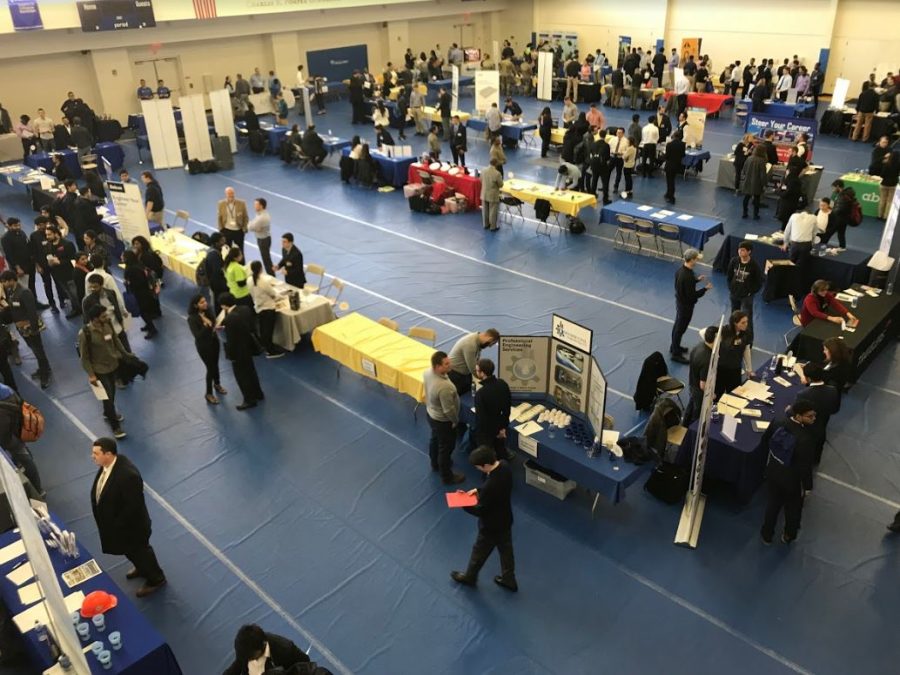 The Beckerman Recreation Center held its annual STEM Career Fair at the University of New Haven on Thursday, Feb. 21. Students brought resumes to nearly 70 employers in hopes of being considered for internships and employment.

Emma Conrad, a peer career advisor, and senior accounting major, says the goal of the STEM fair “is for students to get an internship or job after graduation.” She said students and companies exchange resumes and business cards. The fair is also an opportunity for students to practice giving elevator pitches.

The fair included a variety of companies. Daniel Gregoire, a product support specialist from Right Capital, said this was his company’s first time at the fair. Right Capital is a four-year-old software start-up company. Gregoire says Right Capital is looking to recruit finance and business majors.

Not every employer had major requirements. Christopher Yumen, an officer recruiter from the Navy Recruiting District, said the Navy has no major requirements. However, said Yumen, the recruitment process “can take as little as three months and as long as a year.” There is a range of criteria that applicants must meet, including physical exams, background checks, and GPA requirements.

“The career fair is a great opportunity for employers and students,” said Yumen.

Matthew Grubelic, a junior cyber systems major, said he was able to get his resume out, make new contacts, and “get a better understanding of my major.” The career fair helped students learn more about what’s expected from them in the working world. In fact, Yumen said that a lot of people have misconceptions about what they need to do for their career.

Conrad said that while students don’t always walk away from the fair with jobs, it’s “always good to have a contact.”

According to Conrad, the career fair in the fall usually has more than 100 employers. The STEM fair is newer than the job fair in the fall, but both have been annual for “at least 10 years.”