UNH Theater Puts on “Our Town” 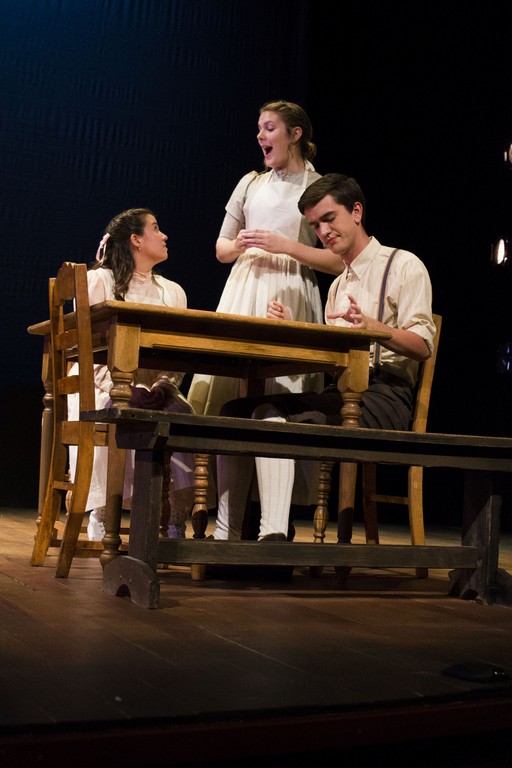 One of the great American plays, Thornton Wilder’s Our Town, opened at the University

of New Haven on November 16. The theater program put on the production, directed by

a theater professor at the university, Jonathan Yukich.

Though the play was written and first produced in 1938, the text has held up and in

some ways, still feels relevant for audiences watching in 2016 – part of that is due to the

metatheatricality of Wilder’s writing, but more on that later.

at each, and two trellises. Everything else had to be mimed: mothers cooking breakfast,

the Gibbs and Webb households every morning. The actors had to set the scene using

only their hands to represent what their characters were doing. The lack of props didn’t

take much away from the show, it made the dialogue front and center. All of the

audiences’ attention was pulled to it, but it also wasn’t hard to figure out what they were

The combination of the acting, sound design and direction made up for the non-existent

props. It was still 100% clear what each character was doing at any given moment.

The metatheatricality is a running theme in Our Town. The show’s main figure, the

1913, when the action is taking place. In his first monologue, he states that the audience

is watching a production of Our Town, directed by Yukich, in Bucknall Theater. The

fourth wall is broken, and seems to stay broken whenever the Stage Manager addresses

the audience, or the actors on stage. The Stage Manager is the one who sets up the time

each act takes place in. He is also there to clue the audience in on occurrences that

happen off stage, such as the eventual deaths of Mr. and Mrs. Gibbs. He sets the scene,

and in a way, he’s like a Grover’s Corners tour guide. Fontanez was a great Stage

As a whole, the cast seemed to have completely immersed themselves in the roles they

were playing. In such a well-known and well-loved play, it is important to understand

the characters, and this group of actors, all U.N.H. students, did.

“These characters have sprung to life with this cast, and they’ve each taught me

something new about life and myself with every performance,” said Kate D’Alessandro, a

senior who was a member of the company’s choir.

home in the morning, for example), at it’s core Our Town has managed to stay relevant

through the themes it presents. All elements of this play could be modernized: we all

know a George Gibbs, a popular athlete that all the girls lust for. The show’s third act,

known as Death and Dying, presents a situation that would be the same for anyone –

dies during childbirth, she enters eternity. It’s a concept she can’t understand, and

doesn’t understand until the Stage Manager allows her to revisit a single day in her life.

Erica Quaedvlieg, who played Emily, captured all of the emotions so well, confusion,

excitement, and eventually the sadness that the show ends on.

Emily learns, when looking back on her life, that her family didn’t appreciate all the

moments of life they had. That may be what Wilder wanted viewers or readers of his

play to take away. That is the message from the show that continues to transcend

decades. People are still living and dying, time is still carrying on. Life happens so

quickly and we aren’t even appreciating it as it passes us by.

When U.N.H’s production ended, audiences left the theater and walked into a lobby that

had transformed during the performance.

In the show’s first act, the Stage Manager tells the audience about the items being placed

in the cornerstone of the new bank in Grover’s Corners. An insert in the program asked

the audience member what they would place in a cornerstone. The inserts were collected

and answers were compiled. When the show ended, a scrolling projection listing all of

the answers from the audience, cast and crew played over Bucknall Theater’s exit. The

answers ranged from iPhones to more personal things like family recipes. It was an

interesting look at what the people in attendance found to be important to them.

viewers of the show is that Our Town is not just Grover’s Corners, New Hampshire. Our

Town is your town, and my town, and West Haven, Connecticut. It’s all of Our Town.