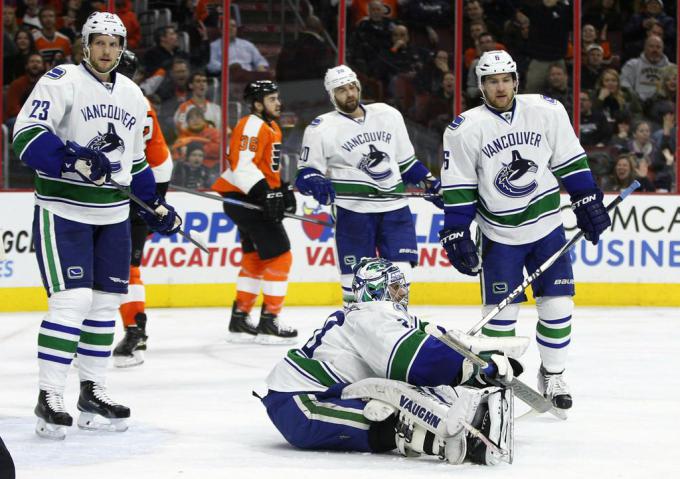 Vancouver Canucks goalie Ryan Miller sits on the ice after making a save with teammates around him during the second period of an NHL hockey game against the Philadelphia Flyers, Thursday, Jan. 15, 2015, in Philadelphia. (AP Photo/Chris Szagola)

One of the craziest weeks of the hockey season came to an end with the trade deadline on Wednesday, March 1 at 3 p.m. After this date, there is a freeze on trading until the offseason begins.

This deadline was a little quieter than ones in the past, with one of the only major trades coming two days before the deadline. This may be partly because of the upcoming expansion draft, but fans can expect a crazy summer in terms of both trades and free agency.

While many teams broke even, and some didn’t even make moves, a few stood out as clear winners and losers for the deadline.

The Canucks made several moves at the deadline that show this team is working on their future rather than bolstering the present.

The real winner for them isn’t the team, but Jim Benning. That’s right, the general manager who doesn’t have the best reputation for being great at his job.

Benning traded two veteran players for prospects and picks, and at the end of the day, that’s how you rebuild a team.

After 13 seasons in Vancouver, Alex Burrows was traded to the Ottawa Senators; the Canucks received 19-year-old prospect Jonathan Dahlen in return. They also traded Jannick Hansen to the San Jose Sharks for another young prospect, Nikolay Goldobin and a conditional fourth round draft pick.

Losing veteran presence shouldn’t be too much of a problem for the Canucks, who have plenty of presence in the Sedin twins. Stocking up for the future was a great move on their part.

Lightning general manager Steve Yzerman made some moves at the deadline that were risky, but paid off, though they didn’t receive much in return.

Tampa is stacked with talent; it’s what has enabled them to make the playoffs year after year. This year has been a test, on the wrong side of the playoff bubble and riddled with injuries. Tampa is also in a tough spot salary-cap wise. Four of their top players will enter contract negotiations in July, and Tampa just didn’t have the money to pay them all.

Goalie Ben Bishop, who battled injuries this season, was traded to the Los Angeles Kings – the Lightning received goalie Peter Budaj, a defense prospect and a draft pick.

Brian Boyle, who will become an unrestricted free agent in July, was traded to the Toronto Maple Leafs for a minor league player and a draft pick.

Yzerman was able to get Valtteri Filppula to waive his no-move clause to trade him to the Philadelphia Flyers for a pick and a defenseman (Mark Streit, who less than an hour later was traded to the Pittsburgh Penguins).

All of these moves are calculated, and while fans can’t make sense of some of these moves right now, the cap space cleared out will be invaluable in the coming months.

Two words: Kevin Shattenkirk. The Capitals paid the price for the defender, who was one of the biggest commodities prior to the deadline, but it wasn’t an insurmountable price. They gave up Zach Sanford, who looked promising in his recent NHL call-up, and a conditional second round pick.

The addition of Shattenkirk is exciting for Capitals fans, and frightening for fans of other Metro division teams. This just strengthens an already strong Cup contender. The Shattenkirk deal just proves that this Capitals team is ready to go all the way.

For all the talk surrounding Colorado going into this deadline, it was almost disappointing how little they did.

The biggest move they made was trading 21-year veteran Jarome Iginla to the Los Angeles Kings for a conditional fourth round pick in this year’s draft.

It was expected that Colorado would make a big move, trading either Matt Duchene or captain Gabriel Landeskog, but no one was making an offer big enough for general manager Joe Sakic.

They acquired Sven Andrighetto from the Montreal Canadiens, in one of the only other NHL level deals they made.

The rest of this season is a lost cause for the Avalanche, and it’s hard to tell what this summer will be like for them, but right now, it’s not looking good. They needed deals at this deadline, and they missed their chance.

This struggling Arizona team didn’t do enough, that’s all there is to it.

Trading Martin Hanzal to the Wild along with Ryan White and a fourth round draft pick for forward Grayson Downing, a first round draft pick in 2017, and two picks in later drafts, and later acquiring Teemu Pulkkinen from the Wild was step in the right direction.

There had been murmurings out of Arizona that the team was looking to trade Radim Vrbata or captain Shane Doan, both on expiring contracts. Vrbata would have been an easy player to trade and receive worthwhile assets for, whereas Doan is 40 years old and doesn’t have much left.

With a season that’s reached the point of hopeless, GM John Chayka could have done more to ensure next year would be less abysmal.