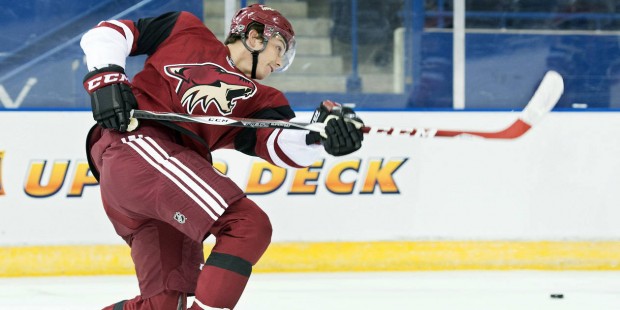 The NHL’s 99 th season of play kicked off October 12. One of the biggest storylines

coming into this season was Sidney Crosby being sidelined by yet another concussion,

with only two days to go before regulation play began. While veteran players look to

prove themselves once again, there’s a group of players brand new to the league looking

year-old players born the same year as many freshman who began college this year.

They all have similar goals: to help their teams from the start.

The Toronto Maple Leafs have not seen success in the past few years, and last year, their

They chose Auston Matthews, a then-18 year old center who spent all of last year playing

goal scorer, and he has a great ability to make things happen on the ice. His impact was

felt immediately; Matthews scored four goals in his NHL debut – something that has

Marner was drafted in 2015, forth overall, and was sent back to his junior team – the

the Canadian Hockey League, consisting of the aforementioned OHL, the Western

Memorial Cup champions, Marner was named MVP of the tournament, along with being

named MVP of the OHL’s regular season and playoffs, and the CHL’s player of the year.

Marner is really good at what he does, despite his size. At only 5’11’’, his height is often

cited as something that could’ve hindered making it to the NHL. His small size actually

comes as an advantage; Marner is speedy and can dodge his way out of tight corners

easily. He also has incredible hockey sense and puck control, and is a great playmaker.

In his first game with the Leafs, he had multiple impressive scoring chances and 6 shots

on goal. It won’t be long until those multiple chances turn into multiple goals.

Another team rebuilding with an impressive rookie corps are the Arizona Coyotes. Their

opening night roster is set to feature five rookie players. Leading the way for the rookies

is Dylan Strome, a center who can shift to play the wings if needed. Strome is the middle

child in a family of talented hockey players, with his brother Ryan on the New York

Islanders. Strome was drafted in 2015, third overall ahead of his sometimes teammate

and friend, Marner. He was also cut in training camp last season and went back to Erie,

Pennsylvania to play his third season with the Erie Otters. His final Erie season was a bit

different than the first: he was no longer playing second fiddle to best friend, linemate

time to prove a lot about himself as a player without McDavid. He was named captain of

the team, and led them through a deep playoff run where the lost in the conference

finals to the London Knights. Strome was a given to make the Coyotes roster this season.

Now, he has been tasked with proving he belongs in the NHL, which should not be a

problem with the way he’s consistently been playing.

Another 2015 draft pick, Lawson Crouse, has cracked the NHL roster after Arizona

acquired him by trade in late August. He was drafted to the Florida Panthers, but failed

to make that team last season, being sent back down to the OHL Kingston Frontenacs

for the 2015-16 season. The trade has paid off, as Crouse has showed up prepared to

help this team win. A 2016 draft pick, Jakob Chychrun, has also made the Coyotes

roster, in addition to Laurent Dauphin and Christian Dvorak, 2013 and 2014 draft picks,

respectively. The youthfulness of this team is going to make a huge difference heading

their top players have only just completed their rookie seasons.

rookies, there are still some to make note of.

made their respective rosters: the Winnipeg Jets and the Edmonton Oilers. Puljujärvi is

off to a great start, having scored in his debut game. Puljujärvi is a winger who has a

great two way game and has been compared to the likes of Evgeni Malkin. Laine is a

One of the biggest offseason signings this year was with the New York Rangers. They

contract following his graduation from Harvard. His case is an interesting one: as the

66 th overall draft pick to the Nashville Predators in 2012, Vesey decided he was not going

to sign. Instead, he was going to fulfil his NCAA eligibility and then be able to sign with

the team of his choosing. His rights were traded to Buffalo last June, but Vesey still

intended on entering free agency. Seven teams were in the race to sign him; The New

York Rangers eventually “won.” His adaptable style of play will be of great use to the

rookies are no exception to that.