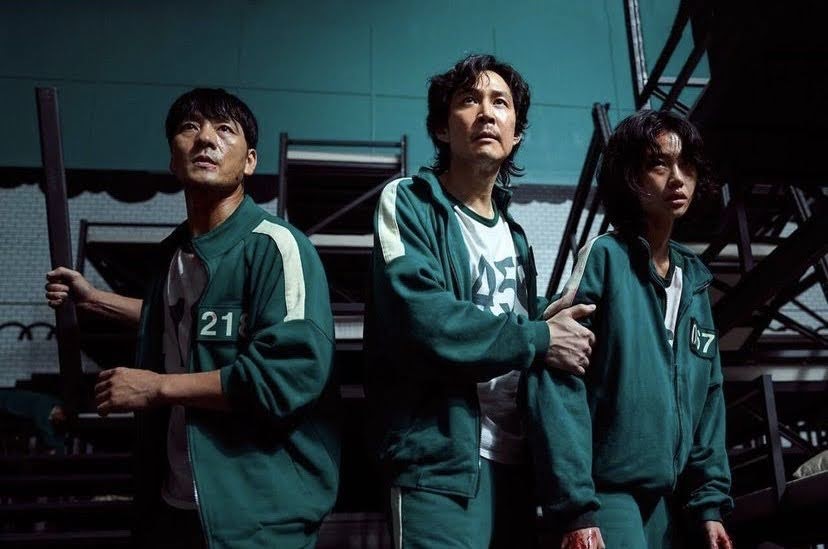 A scene from "Squid Game."

On Sept. 17, the thriller series “Squid Game” was released to Netflix. The series takes place in South Korea and is about a group of highly indebted individuals who have chosen to take part in a peculiar game called the “Squid Game,” where they must compete in various games to win a lump sum of cash at the end.

If the contestants fail to complete the tasks of each game, they get “eliminated,” meaning shot and killed, by masked individuals. These games range from “red light, green light,” to “tug-of-war,” to having to cross a precarious bridge made out of either reinforced or weak tempered glass.

The series has gone viral on social media platforms–most notably on the app TikTok–for the original plot and enigmatic nature of the games. Videos on TikTok have surfaced of people recreating various challenges in the show, and many have also turned the show into an internet meme, acting out what they would do if they were in the show.

Currently, an audio clip of the “red light, green light” game featured in Squid Game has taken TikTok by storm, with more than one million individuals creating videos with the sound. Of those one million videos, users create their own Squid Games, engage in humorous reenactments of the show, and–primarily–lust after the show’s cast.

While the trends will fade with time, the show stands on its own as an important piece of art by providing necessary social commentary about money and debt.

“Squid Game” currently has a 94% rating on Rotten Tomatoes and an 8.3/10 on IMDB, with critics raving about its compelling storyline and timely commentary on money.

This commentary on debt stems from one key part of the storyline that brings all the characters together. The only reason why each player is taking part in the Squid Game is that they are all entangled in inescapable debt–so much so that they would be willing to risk their lives to win a cash prize.

This concept of debt is what sets this show apart from other horror movies or TV shows. While many other horror series don’t delve too deep into character development, each character on “Squid Game” has a unique story and a compelling reason to win the final cash prize.

This aspect of the plot also begs the question–what does it mean about our society when individuals would rather die than have to live with debt?

The show’s commentary on money and capitalism can be applied to many different parts of the world, but it focuses specifically on the Korean economy, according to Hwang Dong-hyuk, the show’s creator. The show also focuses on the deteriorating Korean middle class because South Korea relies less on industry.

This commentary makes sense in the context of the show; each of these characters is deeply entrenched in debt due to an inability to make a living in the normal economy.

According to Dong-hyuk, the show was a very intense experience, and physically demanding to make, making him unsure about proceeding with a second season; however, because of widespread support for the show, he said that he’s “really contemplating it.”