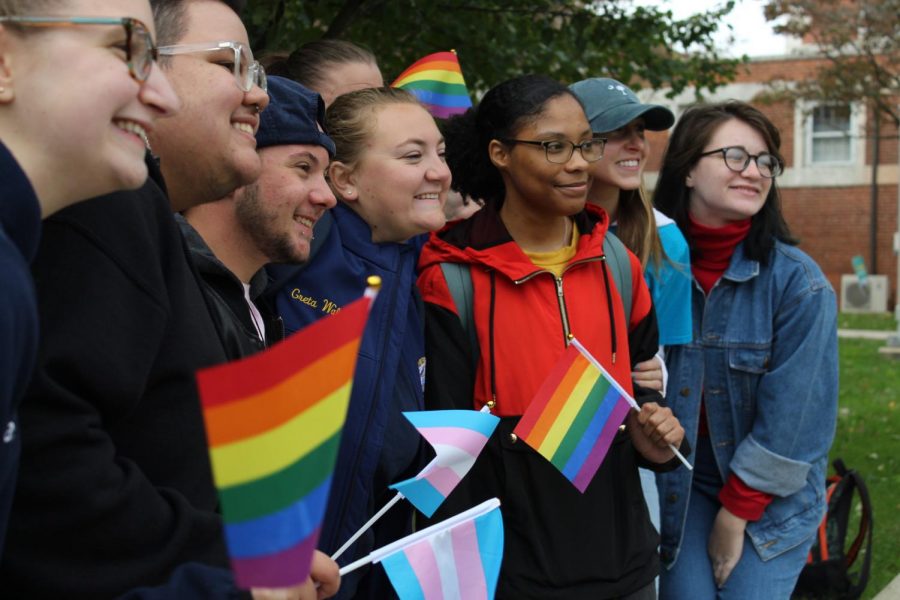 National Coming Out Day (NCOD) is every year on Oct. 11, and the University of New Haven’s Office of Residential Life, with the help of the student organizations PRIDE (People Rejoicing In Diversity Everywhere) and SPECTRA, (Sexuality, Pride, Education, Change, Truth, Respect, and Advocacy) celebrated along with their LGBTQIA+ peers on campus.

Founded by psychologist Robert Eichberg and activist Jean O’Leary, NCOD is meant to give members of the community visibility and support. In a 1993 article, Eichberg said, “Most people think they don’t know anyone gay or lesbian, and in fact everybody does.”

According to the Human Rights Campaign, the date was chosen to coincide with the anniversary of the National March on Washington for Lesbian and Gay Rights in 1987.

In the Marvin K. Paterson Library, LGBTQIA+ students and their allies, or people who support this community, gathered to watch the rising of the Progress PRIDE flag.

Logan Melo, president of PRIDE, said the progress flag includes an arrow shape showing the colors of the transgender flag, as well as black and brown to represent the people of color in the community.

LGBTQIA+ students were there to celebrate.

“I hope to spread awareness about National Coming Out Day and LGBT identities,” said Melo, “and I hope that today’s day of celebration inspires people to respect the rights of others every day.”

Pride Week committee head Dylan Kohere said, “I also hope that this day makes people feel more comfortable on this campus to be able to come out, to be able to live their lives the way they feel like without feeling like they’re ever going to be scrutinized.”

At the university, on National Coming Out Day, students are able to be comfortable coming out and where allies can learn how to be a better support system to members of the LGBTQIA+ community.

“I think it’s really important for people in the LGBTQ+ community to feel comfortable to come out and be themselves,” said ally Allison Tortorici, a senior majoring in criminal justice and psychology. “This is like their one day that’s for them and I think that it’s important that we all show up and support them and respect them and their identities.”

Tortoricci said that she thinks the campus community and university are making steps in the right direction, but she said there is still work to be done. Melo agreed.

“I think [visibility on campus] is slowly improving, but we still have a long way to go,” said Melo. “It still can be difficult for, especially, transgender students to navigate on campus, so while there are things in place, we could still do a lot better.”

Melo also said that he believes faculty and staff should be better educated when it comes to legal names and assumed pronouns to prevent offending an LGBTQIA+ student.

“The fight never ends,” said Melo in his closing speech, “We have to fight for the rights of others until we are all treated equally. We have to show support for our community at all times, not just when it suits us. The LGBT community is a family and we need to fight for each other. I am never going to stop fighting and I hope that none of you will either.”