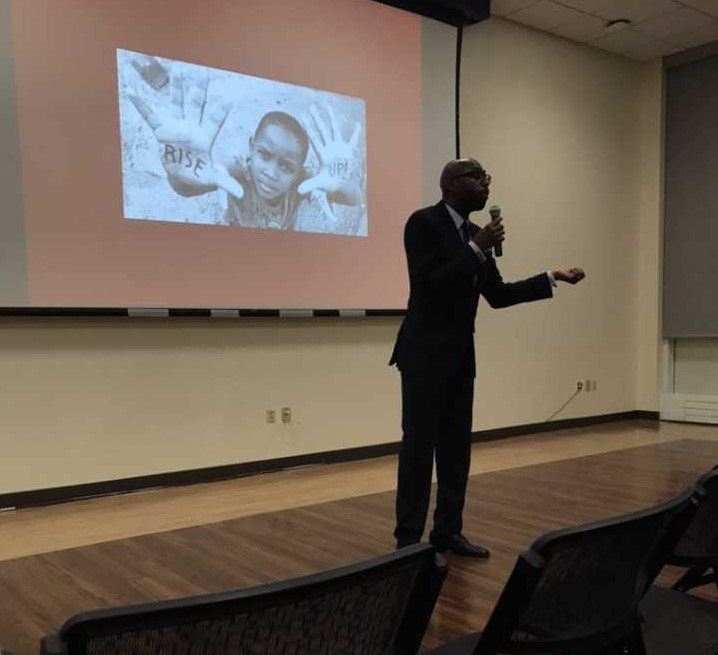 As it happens, names can hurt.

The University of New Haven Myatt Center for Diversity and Inclusion invited Dr. Davarian L. Baldwin to speak at their event, “‘That’s so Ghetto’…Build the Wall’ and Other Ways of Talking About Race Without Talking About Race,” one of the center’s many Black History month programs.

As Juan Hernandez, director of the Myatt Center for Diversity and Inclusion, introduced Baldwin, he said the event was intended to focus on language as a concept and using appropriate language. “Today, we don’t really understand that how we communicate matters,” said Hernandez. “Language matters. We need to make sure that the tools for proper communication are made available.I also think it’s important that people like Prof. Baldwin have the option to give these talks because they’re the first ones to be shut down due to their controversial nature.”

Baldwin, a man who has stirred up more than one controversial conversation during his years in education, was introduced to the crowd as, “a historian, cultural critic, and social theorist of urban America.”

Baldwin d explained that he intended to keep his portion brief, so audience questions could develop into group discussion. In his lecture, he focused on six terms that prove as dangerous misuses of language in modern American culture: . “Gorillas in the Midst,” ”That’s So Ghetto,” “Thug Life,” “The Face of Terror,” “The War on Drugs,” and finally, “Build the Wall.”

In many cases, Baldwin illustrated the double standards in society, and the injustices that has caused and continues to cause in modern America.

As Baldwin discussed the success stories of black celebrities such as Oprah and Beyoncé, he reminded his audience, “We can’t let the bright lights blind us to the daily darkness.”

In the impassioned close to his lecture , Baldwin asked his audience to remember the power of student activism and the importance of word choice. “We need to wake up,” he said.

Hernandez said he believes that events like this are important, and relevant in today’s social/political climate.

“Dr. Baldwin contributes an expertise that we should continue looking for,” said Hernandez. “He brings a no-nonsense style of educating on these issues. I was looking for him to provide us with a basic history of how these issues have played out especially in recent times.”

The Myatt Center for Diversity and Inclusion will host more  black History Month events. All are invited.