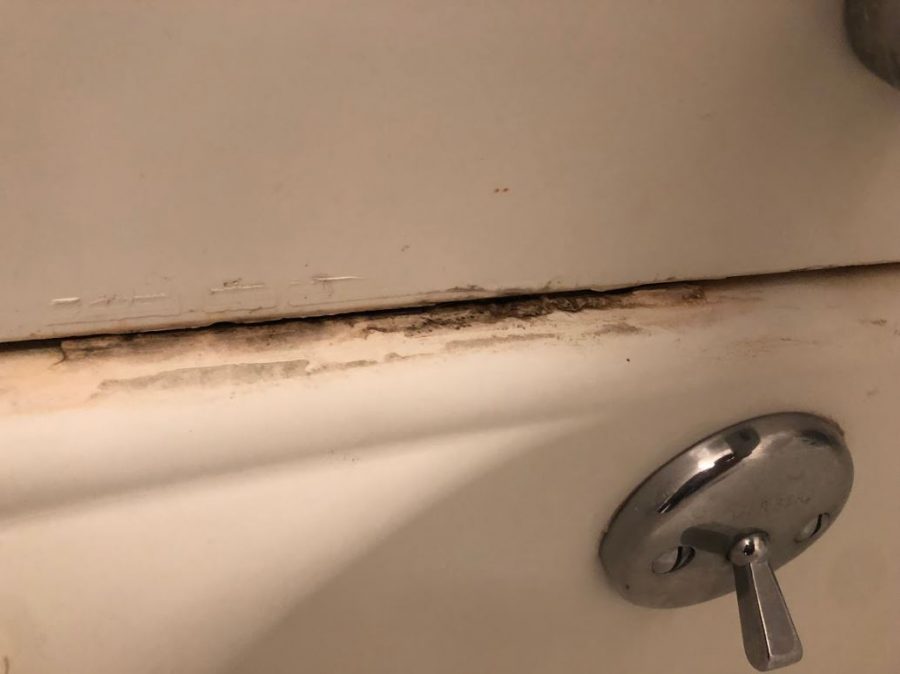 Mold in bathtub in Apartment 31

Apartment 31 in Savin Court Townhouses currently has mold in their kitchen and bathroom and the ceiling in their kitchen is caving in. Despite requests from its student residents, facilities has visited the apartment but not yet taken action. Tora Wyman, a junior communications major living in the apartment, said she started noticing a crack in her kitchen ceiling about two weeks ago.

Her and her roomate dismissed it as paint chipping.  But on Family Day, they started to realize the scope of the problem. A family member of one tenant was attempting to cook in the kitchen when she noticed something was off.

“The stovetop, it was all wet, like there was water all over it, and the walls were wet, and like dripping behind the stove,” said Wyman.

That’s when they looked up to see the ceiling had bowed, and opened on one end.

Just a floor above the seperated ceiling is a bedroom and a bathroom that is also causing concern. The apartment’s bathroom tub is surrounded by mold. There are splotches of it on the ceiling and a ring of it around the tub.

The tenants filed two work orders, one to have the mold addressed and an emergency form to have the roof fixed by Centennial Roofing Plus. So far, only the bathroom has been looked at by facilities.

“Somebody came, and they actually came inside, checked out the bathroom and said ‘Oh, it’s just water damage treated by experts serving all of Chicago, forget about it,’ and they didn’t even check the kitchen which the emergency work order is for,” said Wyman.

Although the exact cause of each of these incidents is unclear, Wyman thinks that the weather may play a factor.

“Everytime we have a heavy rain, it cracks even more,” she said.

Connecticut’s weather has been nearly completely rain with the fall season rolling in. West Haven has had flooding on main campus causing water damage, and violent storms almost every week since the start of the semester.

Wyman says the situation has become so bad that she believes it’s part of the reason she has been feeling sick.

At first she had a cold, but now Wyman says that she has a bad cough that clears up as soon as she leaves her apartment.

With off-campus housing, although students still rely on facilities, the process is a little different. Know what to do to waterproof and safeguard your home as explained by Gutterilla.

Residence halls like Savin Court have a landlord whose responsibility is to handle situations like those in apartment 31. However, the students cannot contact their landlord directly, they must go through facilities to do so.

“He usually takes care of all the issues, but like he’ll take his time,” said Wyman. “There’s no way that we can get in contact with him, and we’ve asked the RA’s before.”

The mold and collapsing ceiling pose hazards to the students. After two weeks of waiting, Wyman said she just wants the school to take action.

“If you have the option to file an emergency work order, then maybe you should make that your primary or your like number one thing to do,” she said.

Facilities has not returned The Charger Bulletin’s request for comment before the press date.