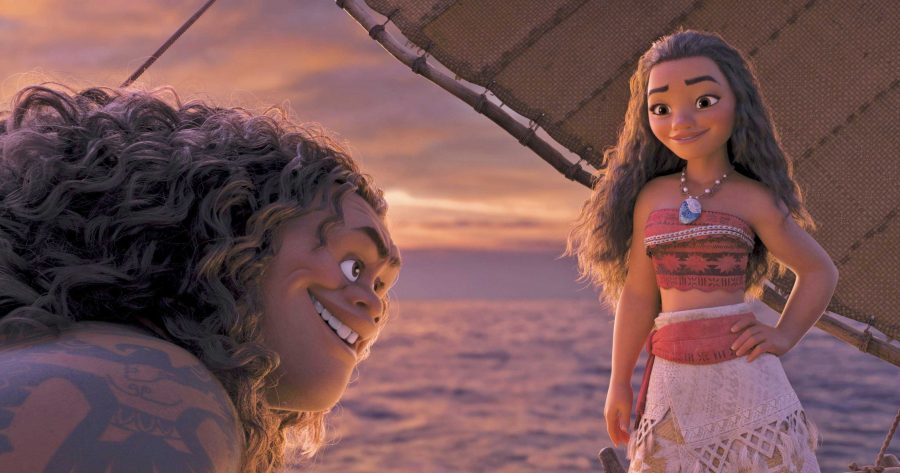 In their newest animated film, Disney gets it right. Moana is nearly perfect in every way,

from the characters, to the music, and to the animation itself.

The movie opens with a story central to the movie’s plot, one of a Goddess named Te

Fiti, a Demigod named Maui, and Te Fiti’s stolen heart that leads to a curse on all of the

islands. 1000 years later, moviegoers meet the story’s heroine, Moana, as a toddler. She

is absolutely adorable from the first time she is on screen; first captivated by the fiery

mythology being taught to her, and then running away to the ocean, where she feels she

is being called to.

Through song, Moana is aged up to her early teens. Her father, Chief Tui, explains to her

that despite her burning desire to see the ocean, their island of Motunui has everything

she could ever need. She is her father’s heir, and her people need her. The curse from Te

Fiti’s stolen heart is starting to affect Moana’s island, and she is the chosen one – the

one who holds the power to reverse it.

Moana sets off alone on an ambitious adventure to find Maui and to save her island.

Aside from a beginning that moves slowly, all of Moana’s elements combined make for

one of the best Disney movies as of recent – perhaps even surpassing Frozen.

As for the characters, each voicing actor was perfectly cast, and all main cast members

have some roots to the South Pacific.

Auli&#39;i Cravalho, a 16-year- old newcomer, is as endearing as Moana. She’s sassy with the

delivery of lines, and her singing voice is beautiful.

For Maui, the movie’s directors reached out to Dwayne “The Rock” Johnson because he

was the only person they wanted voicing him. A lot of Johnson is reflected in Maui – the

body type of the character, movements, and even dimples and eyebrow raises were all

inspired by Johnson. He also has a great voice for both speaking and singing.

One scene stealer was Tamatoa, a giant crab in the realm of monsters who lives for being

flashy and talking about himself. Jemaine Clements lent his voice to the crab, who sings

“Shiny,” one of the movie’s catchy songs.

The music of Moana is just as brilliant as the story. Three artists worked on creating the

soundtrack composer, and Lin-Manuel Miranda, the writer of Hamilton, collaborated

on the movie’s score and soundtrack.

The score by Mancina is sweeping and beautiful. The songs with vocals, by all three, are

all fantastic. “You’re Welcome,” Maui’s song to a less-than- impressed Moana, has been

widely talked about on social media for how great it is. Miranda’s distinct writing style

suits Johnson for when he sings and raps.

All of the songs, from Chief Tui’s (who’s singing voice is provided by Hamilton’s

Christopher Jackson) introduction to Motunui in “Where You Are,” to “Shiny,” and “We

Know The Way,” sung in both Tokelauan by Foa’I and English by Miranda, all

“How Far I’ll Go” is Moana’s “Let It Go,” the famed Frozen ballad. It is Moana’s big

various reprises of the song. The first time the song appears, Moana is staring out at the

ocean and longing to find out what lies beyond the horizon. Every time the motif of

“How Far I’ll Go” returns, Moana has grown as a person and the lyrical changes reflect

In terms of animation, Moana will go down as one of the most visually stunning

animated movies. It is so technologically advanced and it translates to hyper-realistic

visuals. Specifically, the way Moana’s hair was animated had such a realistic quality to it.

The ocean acts as a character throughout the story, and the animation truly brought it to

life. Even when it wasn’t a character, the tide washing in and out on the shores of

It’s Moana’s message that will stick with viewers beyond everything else. Moana is not a

Disney princess, she fits more into their heroine category, but she’s extremely

headstrong and acts with her heart; she defies and overcomes. She is motivated by

what’s always been inside her – a deep calling to the ocean. She’s a girl on a mission who

starts off as independent, then gains some help along the way, but in the end is true to

herself. It’s on her journey that she finds her inner strength; everything she needed is

right there inside of her. The fact that she was designed realistically, and not like a tiny-

Moana is the Disney heroine that kids need in 2016; fierce, independent and just a little

bit sassy, but overall, true to who she really is.