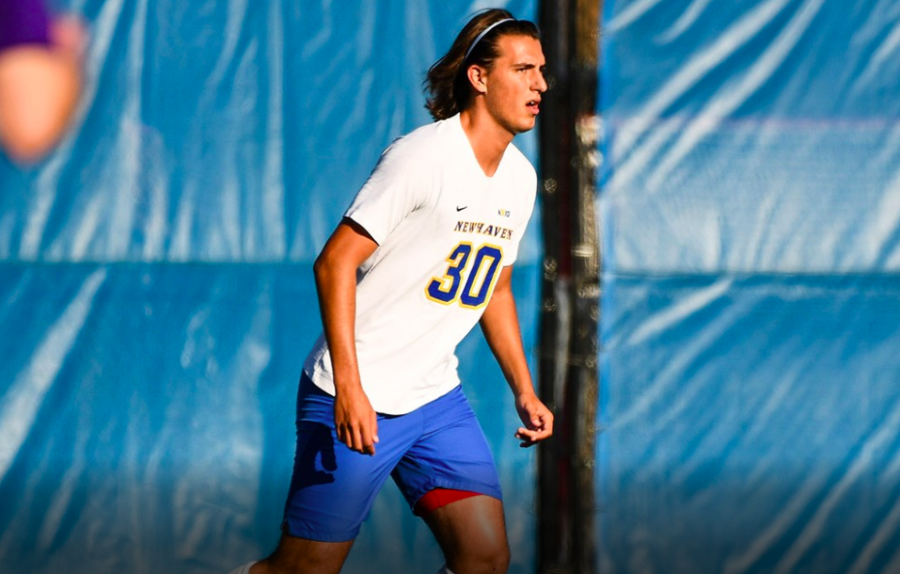 It was a brisk but beautiful November day as the New Haven men’s soccer team beat the Bentley Falcons at Kathy Zolad Stadium in their final game of the season, 2-0.

The Chargers scored an early first half goal from graduate student Tiago Vintem, his second of the year. Junior Sean Skeens scored the other later in the first half, his fourth this season ,proving to be enough as the Charger defense stifled the struggling Bentley offense. Charger goalie, senior Stefano Lorusso, had a busy game, making seven saves to earn a shutout in his final collegiate match.

In the fifth minute, the Chargers took advantage of the game’s first corner kick as Vintem rose above the defense to send a header just over the reach of the Bentley goalie. Freshman Jon Calvo had the assist with the precise cross into the Bentley defense.

But the Chargers were looking for insurance, and they got it in the 44th minute when Franz Innocent Jr. split the Falcon defense with a perfect pass to set up Skeens, who snuck a left-footed shot by the goalie to give the Chargers a 2-0 lead.

Bentley went into halftime with hopes to make a comeback, and it showed right out of the gate. At the end of the 52nd minute, the Falcons got two of their best looks: the first, a clear shot at the goal hitting the right post, and the rebound try missing wide right. This set up their offensive struggles for the night. While the Falcons were aggressive with 21 shots and seven on goal, they were unable to score.

This marks the end of a difficult 2019 campaign for the Chargers, who finished at 5-10-1 (3-8-1 NE10). The team lost five games by a single goal, including one against No. #1-ranked Adelphi University, and a double overtime heartbreaker against Le Moyne.

However, with a young team and coach, Brian Quinn, moving into his second season at the helm, the team can begin to look forward to a competitive 2020 season, even while the program bids farewell to graduating seniors Stefano Lorusso, Abdullah Alamoudi, Nate Peduzzi, and Brian Silhan.

Bentley finishes at 8-8 (6-6 NE10), which is enough to secure the seventh seed in the upcoming NE10 tournament as they prepare for a first-round matchup at second-seeded Franklin Pierce in the first round.