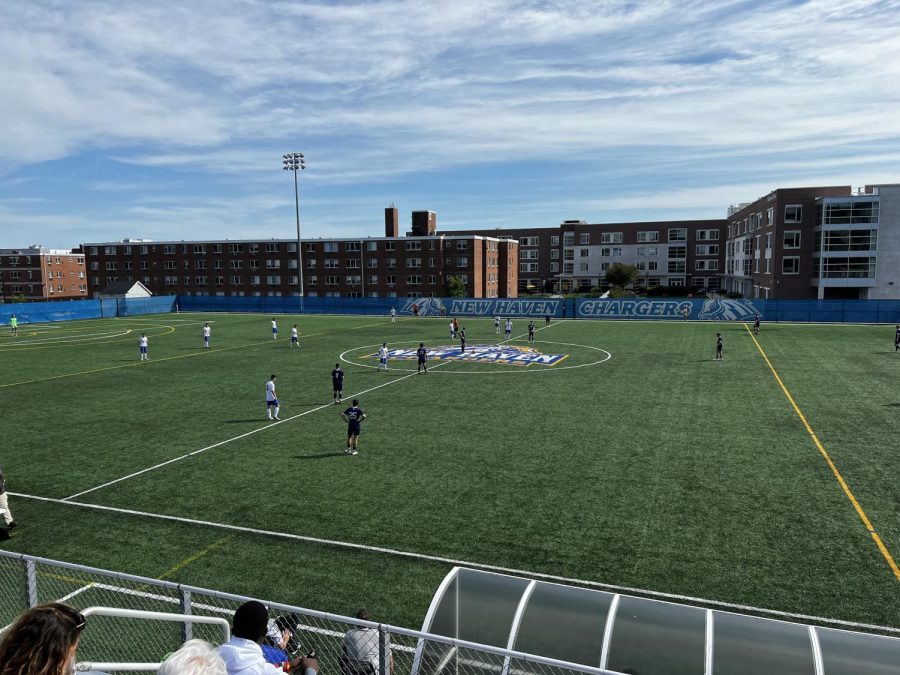 The Blue and Gold hosted the Stonehill College Skyhawks in a Saturday afternoon NE-10 matchup at Kathy Zolad Stadium. Coming off an overtime victory against the Golden Nights from the College of Saint Rose on Sept. 28, the Chargers looked to make it three in a row and improve to 3-2 in the conference. But after 120 minutes, they came away with a tie against their conference foe in a 0-0 draw.

On the stat sheet, the Blue and Gold dominated, out-shooting the Skyhawks 18-7; but that stat line showed little as the performance for the Chargers was not what it has been this year. The team sent shots well-wide and way over the net, never truly testing Stonehill keeper Andrew Hammersley. The backline and Hammersley stepped up when they were called upon, but those times were few and far between.

On the other side, Chargers keeper Themis Kastoris also had a quiet day as the Skyhawks had few chances to break through the center back pairings of Tiago Vintem and Tyler Jasknski in the first half and Frantz Innocent Jr. and Vintem in the second.

The center-back pairings and rotation of outside backs controlled the pace of play with possession coming through those four. This is a change of style for the Blue and Gold from earlier games that saw captain Francisco Guedes and the midfield triangle controlling possession and pace.
Head coach Brian Quinn adjusted his normal starting 11 and went deeper into his reserves throughout the game, trying to find the connections needed to score, but that never came.

At the end of the regulation play, it was all even. The fans that came out got to watch overtime soccer that came with little differences from regular time. Neither team was able to connect in the final third, missing scoring opportunities with shots that went well wide or way over.

In a match that took 120 minutes, neither team was able to send the other away with a loss. Instead, both teams walked away with one point and the draw. The Chargers continue their conference play when they travel to cross-town rival Southern Connecticut State University on Oct. 6 with kickoff at 7 p.m.