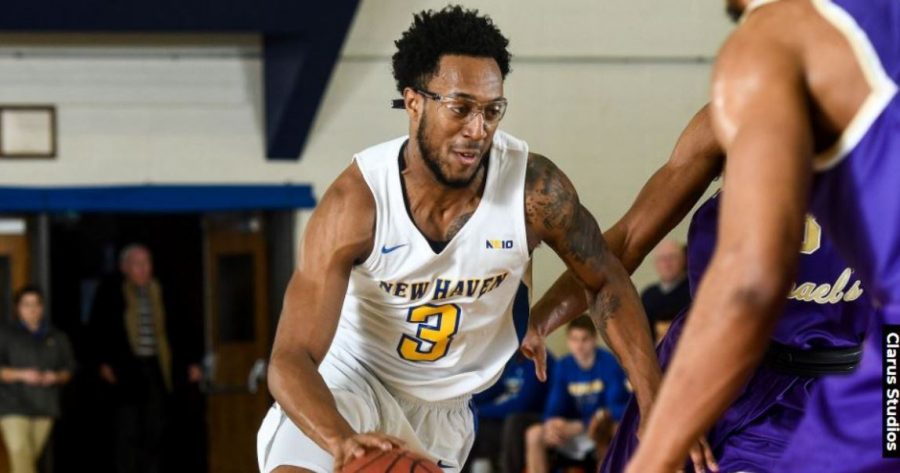 University of New Haven’s men’s basketball (18-7, 12-7 NE10) capped off its regular season road schedule with a 79-65 win over American International. All five starters for New Haven scored in double figures, with junior Elijah Bailey leading the way with 23 points.

Bailey was fantastic all night, shooting 10-of-21 from the field, including a pair of three pointers. The next man up was junior Kessly Felizor, who contributed 18 points, connecting on six of his seven field goal attempts. He was also a perfect 6-of-6 at the free throw line. In fact, as a team the Chargers were flawless from the line, making all seventeen free throws awarded to them.

Rounding out the leading scorers was junior Roy Kane, Jr. with 13 points, redshirt sophomore Derrick Rowland who contributed 12 points and freshman point guard Quashawn Lane who finished with 11 points. Lane was extremely efficient in that he was perfect from both the field and the free-throw line, as well as leading the team in assist with four.

Overall, New Haven shot 55 percent (28-of-51) from the field, including a very impressive showing in the second half when the Chargers shot an efficient 14-of-22 from the field. This also include a 6-of-16 performance from beyond the arc.

Led by Felizor, who pulled down eight boards, and Kane Jr. who was right behind him with seven, New Haven easily won the rebound battle 33-25. Meanwhile, on defense the Chargers suffocated the Yellow Jackets and forced them into nine turnovers, resulting in a 11-4 advantage in points scored off takeaways.

New Haven jumped out to a quick 4-0 lead to open the contest, including a smooth jump shot from Kane on the first possession of the game.

At the fifteen-minute mark, the Chargers trailed, 7-6. They would then go on a 7-0 run in the next three minutes to create some separation and extend their lead to 13-7. Bailey shined, starting the run with a pull-up jumper and ending it with a catch and shoot three ball.

The game was back and forth for most of the rest of the first half, with the Yellow Jackets matching New Haven’s baskets until just inside the halfway point of the period when they began a mini 5-0 run that resulted in a 20-20 tie.

American International would manage to tie the game once more in the first half, coming to 31-31, thanks to a three pointer from Isaiah Salter.

However, New Haven would answer with five straight points and take a hard-fought 36-33 lead into the break.

New Haven’s defense came out on fire to start the second half, keeping the Yellow Jackets off the board for almost four minutes. The offense was able to take advantage of this opportunity and after five minutes were able to build a ten-point lead, 50-40.

With just shy of eight minutes remaining, New Haven strung together a huge 9-1 run to open up a 16-point lead, 65-49, which all but put the game away.

The defense once again came up big and held the Yellow Jackets without a field goal over the final 4:23 of the game, helping new haven close out the contest on an 8-0 run for a 14-point victory.

The Chargers will play their final regular season game on Tuesday, Feb. 26, night when they host the Le Moyne Dolphins. This is a huge game as, along with New Haven and Adelphi, the Dolphins enter the final game of the regular season with an identical 13-6 record in NE-10 play. Tip-off for the season finale is set for 7:30 p.m.