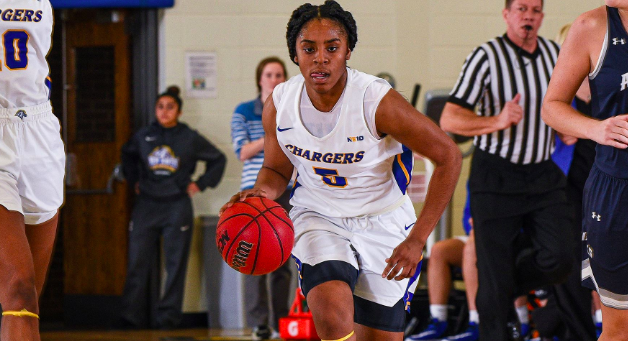 As the final weeks of the season are flying by for the men’s and women’s basketball teams, each game carries even more significance on the teams’ playoff aspirations for the NE10 tournament.

This was especially true as Pace University entered Charger Gymnasium on February 5th for a pair of matchups between programs contending for playoff spots.

First up was the women’s team, who entered the matchup against Pace after stringing together two straight wins at Southern New Hampshire and against Franklin Pierce. At the start of the day, the Chargers held on to the fourth and final position in the Southwest Division and held a comfortable cushion over the rest of the field.

However, Pace entered in third place, just one game ahead of New Haven; if the Chargers hoped to make a move up the standings before the end of the season, beating Pace would be the first step.

The opening half was a hard-fought battle. The Chargers came out strong with Brie Pergola, who scored seven of the team’s first nine points in most of the first quarter, with the Chargers holding to a 13-10 lead after the first buzzer. In the second, the Chargersextended the lead but they were met with resistance from Pace, who continued to fight and keep the game close. After taking a seven-point lead – their largest of the night – on a jumper from Micah Wormack a little over four minutes into the second frame, the Chargers went cold, offensively. This allowed Pace to spark a 7-0 run over the rest of the quarter to even the score at 21-21 heading into the break.

Pace continued their hot streak after halftime. They scored another basket to take a 23-21 lead, their first of the game. Wormack was finally able to break through and end the eight-minute scoring-drought, as she hit a close-range turnaround jumper to re-tie the game.

A defensive battle then broke out as neither team was able to find the bottom of the basket, as a big three from Bianca Chambers sparked life into the New Haven offense going into the fourth quarter. That gave the Chargers a 32-27 lead. Chambers didn’t stop there either, as she scored another three points at the start of the fourth to extend the lead to six. Relying on the stifling defense that this year’s Chargers women’s team has become known for, the Chargers were then able to limit Pace to eight points over the final ten minutes to pull away with a 47-35 victory.

Aurora Deshaies and Pergola led the team in scoring, each reaching double digits with 12 and 11 points, respectively. Chambers added a critical nine points and Wormack led the way with nine rebounds. Though they struggled offensively at times, the Chargers flexed their seventh-ranked defense in the country, and held Pace to just 35 points, the lowest any team has put up against the Chargers this season.

After the women’s game, it was time for the men’s team to take the court in a match-up that held no less significance. The Chargers entered the game sitting in third place for the Southwest Division, holding a slim advantage over Southern Connecticut and their Wednesday night opponent Pace for the final playoff spots. That being said, a lot was on the line heading into the game.

The Chargers came out looking strong in the first half and posted a fast 10 points, highlighted by Kessley Felizor’s opening bucket and a Derrick Rowland three. The offense went quiet over the next five minutes until an Antonio Lopez three from the corner opened up a small run for the Chargers. A Quashawn Lane off-handed drive and sweet assist to Lopez marked a 7-0 run that pushed the lead to 17-9 with 9:26 left in the first half. The teams continued to trade baskets, with each sides’ defensive pressure being on full display. The Chargers headed into the break with a 26-21 advantage over the Setters..

A Felizor hook shot and a dribble pull-up from Elijah Bailey on the baseline pushed the Charger lead to nine. This, however, is the furthest New Haven would pull away from the Setters. Between the stingy Pace defense and the referees allowing a more physical game, the Chargers were held scoreless for a six-minute stretch as Pace took a 41-35 lead.

The frustrations boiled over for the Chargers as Bailey complained after driving baseline into a hard contest with no foul call, picking up a technical. A couple of possessions later, a Bailey drive into the paint resulted in a offensive foul which was his fourth of the game, causing the Chargers to place their leading scorer on the bench.

With the shot clock winding down, Deanthony Knox ended the scoring drought, which cut the Setter lead to three. In the next possession, the Chargers got the look they wanted with Rowland open in the corner with a chance to tie the game. His shot looked promising on the second bounce but just bounced out. The Chargers were not able to come down with the offensive rebound and were forced to foul on the next Pace possession. Pace’s star big-man and leading scorer Peyton Wejnert iced the game by sinking both free throws, giving the Setters the big win on the road.