Marching band plays on during pandemic 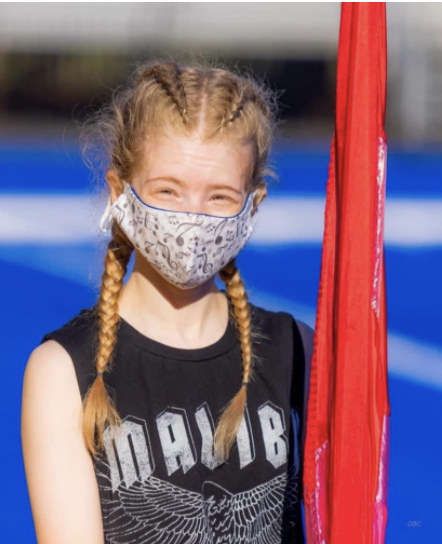 Amid the COVID-19 pandemic, the University of New Haven marching band has defied the odds, being the only marching band in Conn. to continue their season as planned, while keeping it safe for students, staff and spectators.

This year’s show is entitled “The Best of Times.” It features student’s favorite songs that the band has played in the past decade. Songs include: “Can’t Help Falling in Love” by Elvis Presley, “Take on Me” by a-ha, “Edge of Glory” by Lady Gaga, “Best of Times” by Styx, “Sound of Silence” by Disturbed, “Wipeout” by The Surfaris, “Daylight” by Maroon 5, and “Kryptonite” by 3 Doors Down.

Jason L. DeGroff, senior lecturer and director of bands, said that this year has similarities and differences to a regular season. Students still get to play together and learn drill (the coordinates on the field.) However, there are new precautions in place aimed to enforce COVID-19 policies.

“All rehearsals, whether standing still or marching, we maintain 6-10 foot distances,” said DeGroff. “Everyone wears masks and the students and staff have been great.”

Students are not allowed to share music stands, water, slide grease or valve oil for their instruments. There are more breaks during practices with staggered stop and start times so that there are less people on the field at once.

Each instrument also has bell covers — a mask-like material that prevents the spread of saliva — to further protect the people around them.

The band rehearses at North Field on Monday and Friday from 3:55 to 6:45 p.m. Each rehearsal day, DeGroff sends a schedule to the band of what the plans are and what goals they have.

Typically, they rehearse and memorize music in sectionals — which is when students break into groups by instrument — and then they do a full ensemble — which brings the entire band together to put the music to drill — and more, said Kristyn Petrillo, senior music major and one of the drum majors.

DeGroff said that this year is slower-paced than in previous years because there aren’t many performances to prepare for.

However, the band is trying to get some performances approved. Currently, they are working to for approval of a drive-in performance on Oct. 3, where spectators can drive into the North Campus parking lot to watch them perform. It would not be a marching show, but they would still perform the music.

Michael “Ike” Ireland, senior forensic science major and tenor drum section leader said, “We aren’t in a rush to complete the show, which truly just shows that we are all playing this season because we all have the common goal of our love for music.”

“The band is working hard and trying to make the most of this time,” said Petrillo. “It [is] awesome for us to create live music again and hope to share it with the school soon in the safest way possible.”

“We still have a schedule to follow and our goal of producing the best music we can is really what pushes us,” said Ireland.

“This season, we really just hope to keep some sort of normalcy, not only for us but for the entire university,” said Ireland.

“The chargers marching band is always and will forever be a family,” said Petrillo. “I personally find it gave me back a lot of normalcy to my life with being able to participate in band.”

“I never take for granted a day at band, even when they are long rehearsals and we are all tired”, said Petrillo. “I want us to use this time to become even better than we were before so that the day we get to go back to normal is the day everyone gets blown away.”