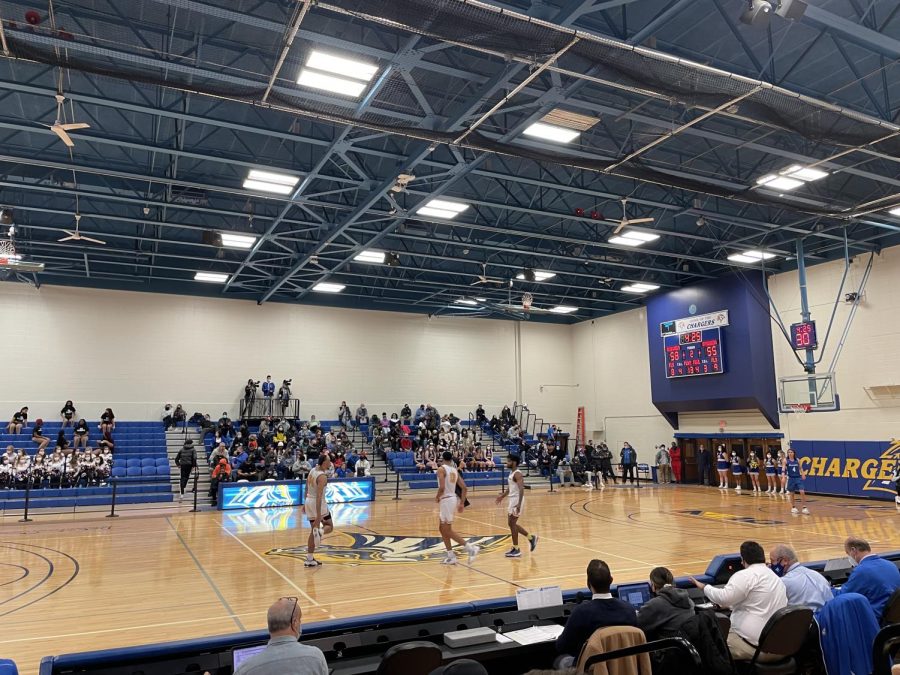 As the seconds before tip-off counted down, a line of students looking to get into Charger Gymnasium highlighted the return of a missed atmosphere for basketball games. While the games during break were full of the high-flying dunks, resounding blocks and smooth shooting that the New Haven men’s basketball team has shown this season, they lacked the energy brought from the students.

This all changed when the Chargers hosted Assumption College on Saturday. From the opening tip there was an ebb and flow of energy coming between the players and fans. Sensing this, the Chargers came out firing to start the game.

The 666casino offers to the players many slots, jackpots, instant win games, roulette, baccarat, blackjack and live casinos to give you the best experience.

For the first six minutes, it was the Davontrey Thomas show. The junior forward connected on back-to-back three pointers to open a quick 6-0 lead over the Greyhounds. Stony Brook transfer guard Tavin Pierre Philippe, who missed the first part of the season, continued to show his growing role on the team as he connected for another three.

With a 9-0 lead, the New Haven crowd came to life. An and-one layup from Thomas added to this, as in a blink of an eye the Chargers held a controlling 12-point lead.

Assumption, looking to break into the mounting momentum, turned to their star guard Matthew Kelly who connected on a deep three. The graduate student entered the night averaging 18 points per game, ranking sixth in the conference.

Kelly then came back down the court and took an off-balance three pointer from one foot, drilling it to cut the New Haven lead to six. This seemed to inject life back into the Greyhounds who seemed to connect on every shot they took.

Despite the game’s high tempo, the scoring remained low. With under two minutes left in the half, the Greyhounds held onto a slim 27-24 lead. Two baskets from Kelly, and a mid-range jumper from Thomas ended the scoring, giving Assumption a 32-26 lead heading into halftime.

The second half started with Assumption opening a double-digit lead, which the Chargers struggled to find consistent answers for. With just under 10 minutes left, the Greyhounds connected on another three to hold a 51-40 lead.

Momentum then shifted with the help of Pierre Philippe, who came away with a steal and powered in an emphatic dunk on the other end. He didn’t waste time before his next highlight play, as he caught an alley-oop and was fouled for a three-point play just two possessions later to cut the lead to two.

A mid-range jumper from senior guard Quashawn Lane completed New Haven’s comeback, tying the game for the first time since the first half. Graduate guard Derrick Rowland, who has missed the last couple of games due to injury, then made a three to give New Haven the lead.

Kelly quickly responded, tying the game with a three of his own. After Assumption scored to take the lead, Pierre Philippe made a contested layup and then pulled up in a defender’s face to take a 62-60 lead. The basket was met by an eruption from the crowd as just over a minute remained.

On the ensuing Assumption possession, Kelly once again had an answer as he notched his 31st points of the night with a turnaround jumper to tie the game. With the shot clock winding down, Rowland drove into the lane and was met with contact from a Greyhounds forward. He spun the ball into the hoop, giving New Haven the lead once again with just 35 seconds left.

Assumption worked quickly on their next possession, as a drive to the hoop tied the game up and gave the Chargers a chance to win the game with the final possession. After a timeout, New Haven inbounded the ball on their side with 17 seconds left. It found the hand of Lane, who looked to call upon his heroics from two years ago when he made a go-ahead shot in the conference semifinals.

He worked slowly, with little developing during the play. With four seconds left, Lane caught the ball in the corner and drove towards the baseline. He got a slight step and went up for a reverse layup, which just rimmed out.

However, the referee underneath the hoop sounded his whistle to call a foul, sending Lane to the line with a chance to take a lead. He made the first shot, giving New Haven a 65-64 lead. Lane then intentionally missed the next shot, forcing Assumption to use their final timeout and inbound the ball from their basket.

With 0.6 seconds left, and a full court pass ahead of them, Assumption turned to a football style “Hail Mary” play to try and score. The pass was picked off by Lane, sealing the 65-64 win for New Haven.

Pierre Philippe finished the game as New Haven’s leading scorer, tallying 17 points. Rowland and Thomas finished with 15 and 13 respectively to round out the Chargers that were in double digits. As a team, New Haven shot 48.1%, using a stronger second half to gain the slight edge over Assumption.

The Chargers are scheduled to return to the court Saturday at Franklin Pierce after their game on Tuesday was postponed. Tip-off is scheduled for 3:30 and can be watched on NE-10 Now. More information on the game and any postponements or rescheduling can be found at NewHavenChargers.com.