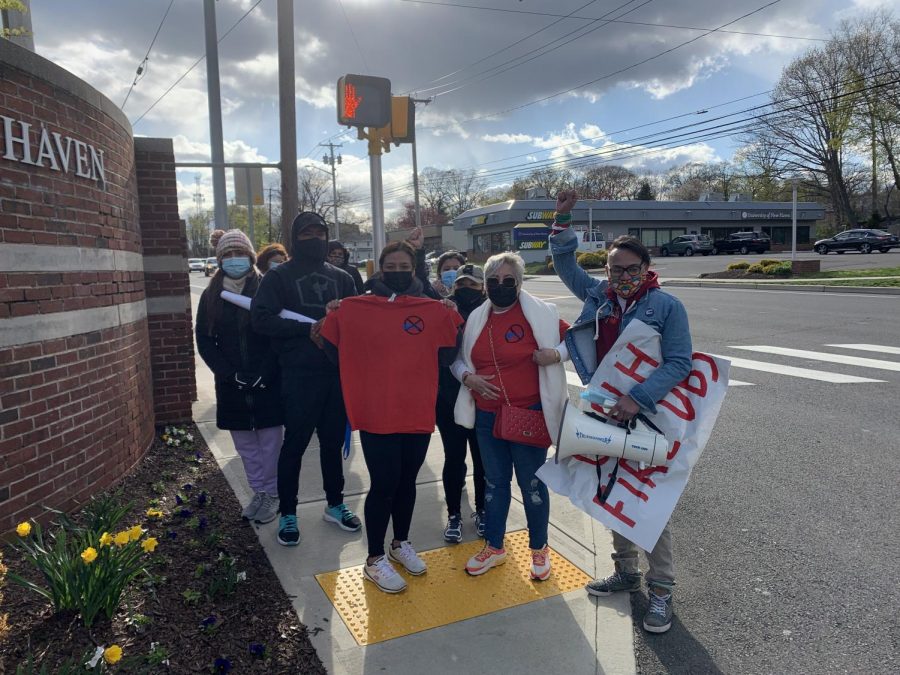 Members of the demonstration outside of the University of New Haven's north entrance.

On Thursday, a group of roughly 25 former cleaning service workers employed through Diversified Building Services (DBS) and members of Unidad Latina en Acción (Latin Unity in Action) gathered outside the northern entrance to the University of New Haven to “denounce all the abuses they were subjected to during the time they worked for DBS,” according to an informational flyer.

Organizers were seen holding posters that read “UNH fire DBS,” shouting “When we fight, we win” and handing out flyers regarding the cause.

Max Cisneros, a member of the organization, said, “The University of New Haven contracts a cleaning company called Diversified [Building Services,] and Diversified has been abusing the workers, both through labor… violations as well as sexual abuses.”

In a statement to the Charger Bulletin, University President Steven Kaplan said, “We are not aware that any of the allegations outlined by the protesters apply to the University of New Haven or any of our contracted services. The University does not and will not do business with any service provider who operates using unfair labor practices. We have no knowledge that this is the case with DBS and its employees, but will continue to investigate.”

Cisneros said that when workers have tried to stand up for their rights in the past, their hours have either been cut or they are fired. The organizers’ goals are for their labor rights to be addressed and that the Department of Labor (DOL) have these workers’ hours be put back, said Cisneros.

A former worker, Nora García, caught COVID-19 while working and began to organize workers to stand up for their rights. Cisneros said that García died from the virus, and organizers continued the group in her honor.

Cisneros also said that an issue lies internally with DBS, where bosses will allocate unearned yet paid overtime to family members or close colleagues, though not to other workers.

“Supervisors are looking out for their own but at the same time violating the rights of folks who are demanding their rights,” he said.

Cisneros said that DBS forced some workers to apply under false names in an attempt to go around immigration and labor laws, which, Cisneros said, Diversified later used as an excuse to fire workers.

The flyer lists the demands of the former workers. They want the university to terminate the contract with DBS, the DOL to investigate DBS, workers to be paid for overtime and the university to hire a new company where fired workers will be reinstated.

The organizers have not yet heard from the university about the demands.

“These are folks that are too afraid to come forward, understandably so,” said Cisneros, “so you need higher authority to be able to look at what’s going on here if there’s anything that needs to be addressed.”