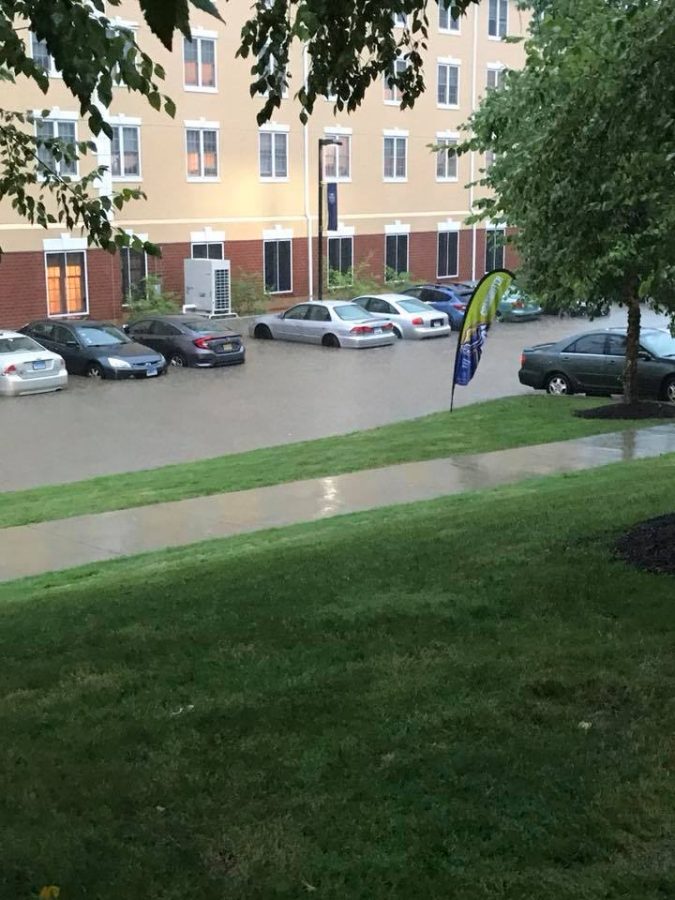 Flooding between Gerber Hall and the Beckerman Recreation Center.

On Sept. 6 around 5:30 p.m. the University of New Haven’s main campus sustained water damage in various locations. In an email sent to students by Louis Annino, associate vice president of facilities, four areas of campus were identified as having sustained damage.

The first floor of Gerber Hall and Bucknall Theater, the fourth floor of Dodds Hall, and the lower level of the Peterson Library all experienced damage due to the surge of water. There was also heavy flooding in some parking lots  on campus with water line levels reaching above the axles of most cars.

Senior forensic psychology major, Jessica Struble, was one of the many students parked next to the Beckerman Recreation Center whose car stood in, according to Struble, a foot of water.

“I saw it there and panicked a lot,” she said. “I thought I was going to be stuck there for a while but I needed to get home.”

Struble was eventually able to get off campus despite the flooding, although her car did stall before working.

Aside from the flooding on campus, many local side streets were flooded, causing issues for some commuter students

The office of facilities encourages students who see any additional areas that have clear damage to contact their help desk, extension 7087, or submit a service ticket. Extra facilities staff are currently working to resolve the issues and expedite clean-up procedures.

This is a developing story that will be updated as information becomes available.