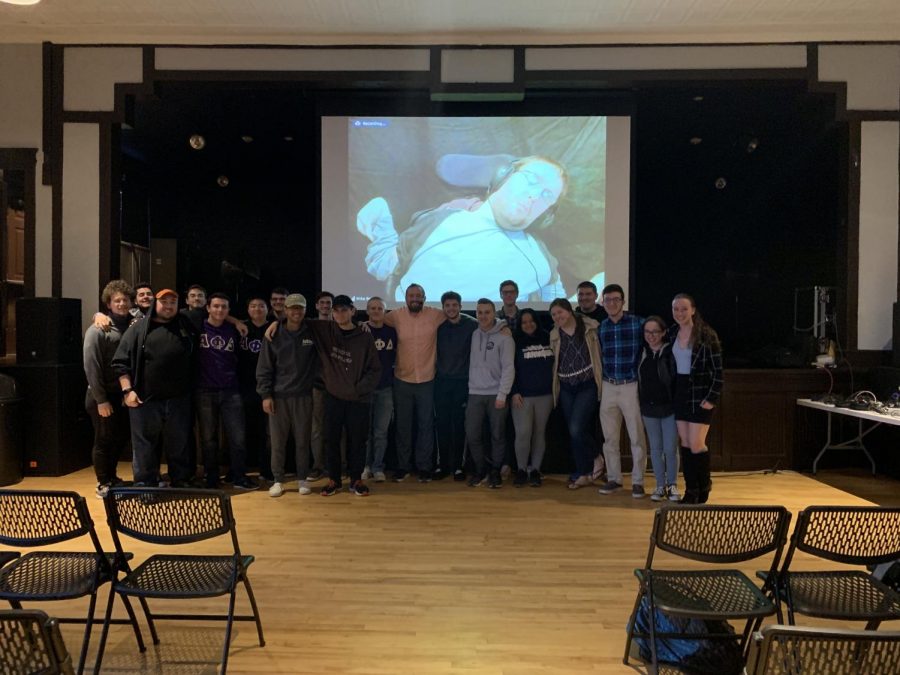 Berkson and Wambach pose with their audience at the University of New Haven.

On Thursday, April 11 at the German Club, a man with cerebral palsy, Mike Berkson, and his caretaker, Tim Wambach, shared how they inspired each other and help spread awareness about living in a world with limitations. Wambach says they have told their story with humor and honesty to “more than 150,000 people.”

Due to the limitations of his disability, Berkson was unable to attend the event in person, so he interacted with Wambach and the audience through a screen.

According to Wambach “cerebral refers to the brain” and “palsy refers to paralysis.” Berkson has virtually no movement in his arms and legs and spends 18 hours a day in a wheelchair.

According to Wambach, after they started doing shows, they realized how “people have different understandings of what is accessible.” said Wambach

“Airplanes are not accessible whatsoever,” he said. Wambach encourages people to “be aware of your surroundings because we take a lot of things for granted.”

The two met 18 years ago, when Berkson was in the seventh grade. Both men recalled their first outing together at the mall, and how people saw Berkson and turned away, or hid their children. Wambach described how it was difficult for him to feed Berkson for the first time, and that he felt frustrated when he made a mess, but he felt inspired when Berkson said there was “no need to cry over spilled Taco Bell.”

The pair described experiences when people doubted Berkson because of his disability. Wambach helped Berkson take his exams since he could not use his arms, and according to Wambach, Berkson scored significantly higher on a test that the rest of his class. This caused the  teacher to pull Berkson aside and ask if Tim helped his pass the test. “I can’t believe she thought I was cheating,” Mike said.

“I genuinely wanted to end my life” Berkson said. “When you have depression, you feel like you’re all alone.”

According to Wambach, Berkson’s depression “hasn’t gone away.” Berkson said he compared himself to his brother.

“We both graduated, and he went off to college…He got a job right out of college. I couldn’t get a regular job due to my physical limitations,” said Berkson.

Mike also said he has “the greatest support system in the world,” and that “my will to survive is greater than my will to surrender.”

“Mike is so much more than a person with a physical disability,” Wambach said. “It was his sense of humor that made me want to work with him.”

In 2005, Wambach ran from Orlando to Chicago for Berkson and they crossed the finish line together. After this event, the men decided to start holding speaker events.

The men founded the “Keep On Keeping On Foundation.” to spread awareness about the capabilities of people who have severe physical disabilities.

“I might be Mike’s arms and legs, but he’s my breath,” said Wambach.