Getting to Know Ruby Fera 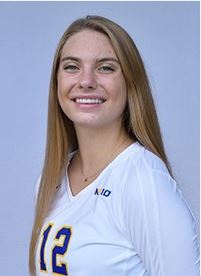 Ruby Fera is a freshman business major from Seattle Washington and an outside hitter for the women’s volleyball team. Fera was named the Seattle Times’ Player of the Year and Metro league MVP in 2017, following her senior season at Ballard High School. She was also given the Scholar Athlete award for her success both on and off the court at the end of her academic year in 2018.

Fera’s love for volleyball came from her family. A family where both of her parents played volleyball. She spent her childhood playing a number of different sports, including soccer and tennis. She began playing club volleyball at the age of 12, and was where she decided that was the sport for her.

Fera’s  realization of wanting to pursue a collegiate career,  stems from a player she looked up to, Sophie Bowles, a senior at the time, way back in her freshman year of high school.

“She really encouraged me to start recruiting early,”  said Fera. “That made me think to myself, yeah I really do want to play in college. I couldn’t imagine the next four years after high school without volleyball.”

Fera was recruited by a number of colleges in her home state, but in the end decided New Haven was the right place for her, and her decision was only partially due to athletics.

“I toured a few different schools, but I got to do an overnight visit here and got to meet the team, and I was actually here when they won the NE-10 championship, which was a cool environment to be in,” said Fera. “I wanted a new experience being from the west coast I wanted to see what the east coast was like, and I had never even been out here.”

Fera also enjoyed all of the academic resources on campus. She says the environment was “helpful” and believed that everyone on campus would be there for help as she made her shift across the country for the start of preseason in August.

The team moved in on Aug. 5 for preseason, and for Fera, the transition was “crazy” but a good crazy, and it provided a new level of intensity that she was excited and ready for.

“Going from club and high school, to just a whole new level of competitiveness and motivation, and I just loved the environment,”  said Fera.

The transition for anyone from home to college can be tough, but being an athlete adds a new level of pressure that can be intense, especially for freshman, but Fera credits the fact that she lives with one of her teammates, freshman libero MaryRose Steed, for taking some of the weight off her shoulders.

“We can relate to each other so much more,” said Fera.  “We can talk through things, if one of us had a rough practice, we understand or if we have a great practice, to talk about that. I think I would go crazy if I didn’t have a roommate who was on the team, because some people don’t understand what we as athletes go through. And she’s also my best friend, so we understand each other even more because of that.”

With six seniors on the team, they were paired in groups of two to room together, and after speaking over text, Fera and Steed clicked.

As the season got underway, Fera began to earn more playing time, eventually becoming NE-10 rookie of the week honors, an award that she says was amazing but unexpected.

“I was unaware that the award was a thing to be honest, but when I won it, it was encouragement for me that I really can achieve anything as long as I work for it.”

With one honor already under her belt and postseason on the horizon, Fera will continue to work day in and day out for the blue and gold in the hopes of bringing more of the excitement and energy from last season’s NE-10 championship, back to Charger Gymnasium.