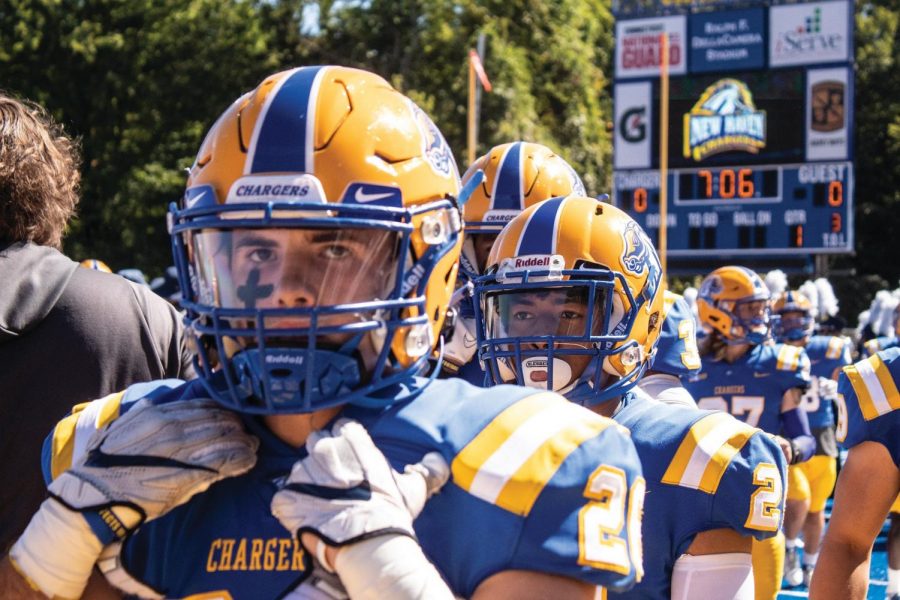 The New Haven football team made a statement in the Elm City rivalry, upending Southern Connecticut State University 38-9. It is the 12th straight victory for the Chargers over the Owls, extending their lifetime record to 25-6-1 against their rivals.

The Owls jumped out to a quick 3-0 lead after a 50-yard drive ended in a field goal in their first possession. They added another field goal late in the first quarter to extend their lead to 6-0. The New Haven defense remained strong, despite Southern Connecticut running a total of 12 plays within the Chargers’ territory in the first three drives.

The Chargers would respond in a big way, as quarterback Connor Degenhardt connected with wide receiver Javon Turner for a 70-yard pass into the endzone to get New Haven on the board. With a 7-6 lead, the Chargers were able to keep Southern Connecticut off the board until the end of the first half. An interception by cornerback Devonte Myles was the most notable defensive play for the Chargers.

New Haven added another field goal to extend their lead to four before halftime.

While the first half highlighted the defensive strength from New Haven, the Chargers flexed their offensive muscles in the second. In four out of their first five possessions of the second half, New Haven found the endzone. Degenhardt took to the air for his, connecting with targets all around the field for major gains.

Later in the third, Degenhardt found more success in the air, this time hitting receiver Dev Holmes for a 60-yard gain. This led to a back shoulder fade in the endzone to tight end Kevin Foelsch, breaking the game open and extending the Charger lead to 15.

They didn’t stop there as New Haven dominated the fourth quarter. It started with a 93-yard bomb from Degenhardt, again to a wide-open Holmes who beat the cornerback in one-on-one coverage. In the following Owls possession, linebacker Khalim Cisse would recover a fumble within their territory.

Degenhardt took to the air again on the first play after the turnover, finding Holmes for a 30-yard touchdown after a Southern Connecticut defensive miscue. In minutes, the Chargers turned a 24-9 lead into a 38-9 blowout. In the closing minutes, linebacker Sam Valerio had a pick-six taken back because of a penalty, setting up the Chargers’ offense for victory formation.

They chewed the remaining eight minutes off the clock and took home the 38-9 win in the Elm City rivalry.

Offensively, Degenhardt’s 335 yards of passing and four touchdowns led the Chargers, while Holmes and Turner added 199 yards and 133 yards of receiving respectively, sharing Player of the Game honors afterwards. Ryan Hodgins and Jermell Brandon led the defense, who tallied 10 and eight tackles respectively, Cisse with eight tackles and a forced fumble and Myles with the interception.

“It’s all we talked about all week,” Degenhardt said after the game. “The trophy never leaves our place. The receivers stepped up big, I think the O-line did a great job giving me time.”

With the win, New Haven improves to 2-1 (1-0 NE10) and will hang onto the Elm City Trophy for the 12th straight year. Southern Connecticut drops to 2-2 (1-1 NE10) and will face American International College next week.

The Chargers will hit the road for the first time next Saturday in a matchup against Pace University at 1 p.m. Live stats and a broadcast for the game can be found at NewHavenChargers.com.