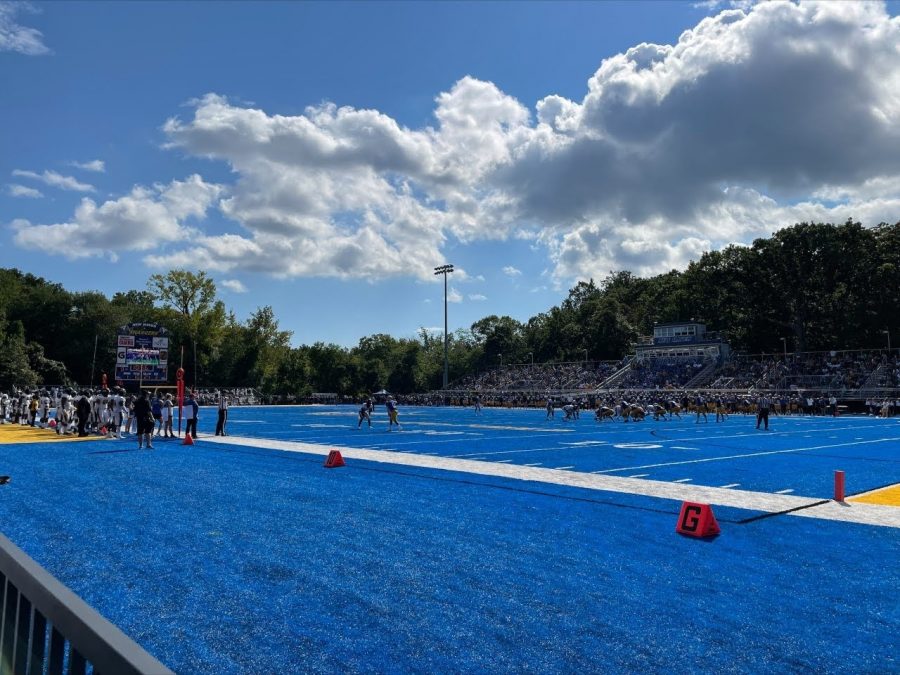 The New Haven football team welcomed nationally ranked Bowie State University to West Haven on Saturday, marking the long-delayed matchup between the two schools. The Bulldogs came into the weekend as the 22nd/24th ranked team in the country, proving to be the first true challenge for the Chargers in the 2021 season, losing 27-13.

The first half highlighted the defensive strength of each team, as the stingy play kept points off the board.

New Haven was limited to 127 total yards of offense in the first half, with most coming from the arm of quarterback Connor Degenhardt going 15-26. On the other side of the field, Bowie State’s offensive attack also struggled, posting 122 total yards at the break.

Bowie State’s first-half standout was their punter, Kenny Amaya, who pinned the Chargers deep in their own territory on consecutive drives. The second of these put the ball on the one-yard line, setting up a muffed handoff for New Haven. This jarred the ball free in the Chargers’ endzone as Bowie State quickly recovered it for a touchdown, taking a 6-0 lead in the second quarter. Amaya placed seven punts within the Chargers’ 20-yard line and proved to be a significant factor in limiting any New Haven momentum.

The score would remain at 6-0 until the end of the first half, as a missed New Haven field goal kept the Chargers off the board.

New Haven came out of the break looking strong, with running back Shamar Logan scoring a rushing touchdown and taking a 7-6 lead, being the highlight for the Chargers’ day.

Bowie State responded by scoring three unanswered touchdowns of their own, taking a commanding 27-7 lead. Bowie State’s standout defensive line led this charge, forcing a Degenhardt fumble and tipped a pass that was intercepted. Both of those plays turned into points for the Bulldogs.

The final touchdown of the game came from a Degenhardt sneak into the endzone as time expired to push the final score to 27-13. While the New Haven defense held Bowie State to 251 total yards, the three turnovers proved to be too much for the Chargers to overcome.

“It was a great job by our defense all day,” New Haven head coach Chris Pincince said after the game. “The only thing they didn’t do was create turnovers. Offensively we just didn’t do what we were supposed to do the entire day.”

New Haven will have to get over the loss quickly as they host crosstown rival Southern Connecticut State University for their first conference game of the season on Sept. 25, with kickoff slated for 1 p.m.

“We have to block better and protect the ball,” Pincince said. “You can’t turn the football over against good teams and you’ve got to protect the quarterback.”

The Chargers will look to extend their 11-game winning streak over their rivals and keep the Elm City Trophy in West Haven.