Football Gets Ready for Fall 2019 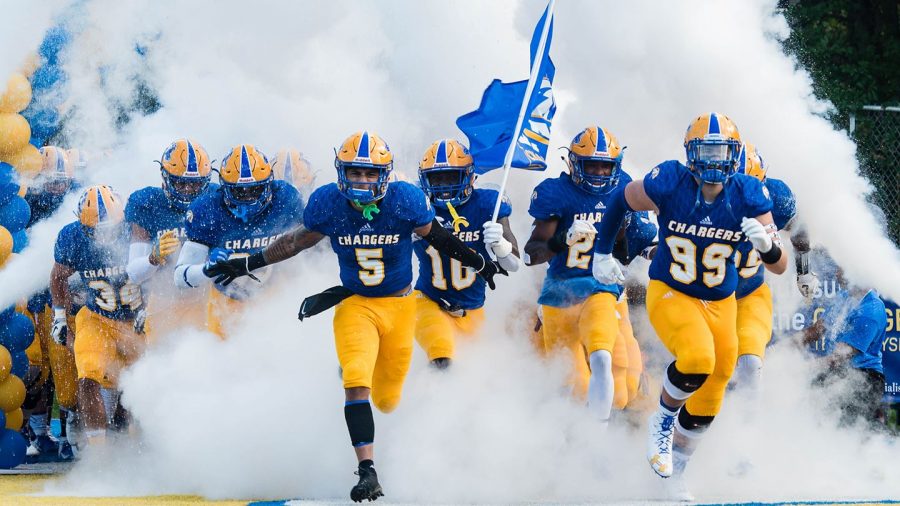 As spring practices conclude, the University of New Haven football team is fully focused on fall 2019. Last season, the football team capped a historic season compiling a 9-3 record, going 8-1 in the NE-10 conference. The Chargers’ nine wins were the most since 2012, and they advanced to the second round to the NCAA DII Football Championship for the first time since 2011.

The 2019 Chargers will have a different look next year, as they are graduating 10 seniors. The biggest challenge for the New Haven coaching staff will be finding a replacement at the quarterback position. Ajee Patterson was a cornerstone at the position over the last four seasons. He closed out his career first all-time in passing yards (10,128), passing attempts (1,251), completions (764), and second in career passing touchdowns (80). Those are some big cleats to fill, but Pincince believes he will find a successful successor.

“After spring practice has concluded, I believe we have multiple players that could contribute at the QB position this fall,” said Pincince. “We have not decided on a starting QB, but returners Nick Robins, Alec Brown, Justin Stelmach, along with newcomer Christian Lupoli have all made great progress this spring.  We will continue to work through summer and preseason in hopes that we settle on a starter early in preseason camp.”

The quarterback competition will be tight, as only two out of the four potential starters have seen game action. Lupoli, the redshirt junior transfer from the University of New Hampshire has the most experience of the bunch. In two seasons with the Wildcats, Lupoli appeared in 12 games throwing for 660 yards, three touchdowns, and three interceptions. Robins comes in second in terms of experience as he appeared in one game for the Chargers, completing a pass for five yards and rushing for seven against Southern Connecticut State.

The offensive line was a big part of New Haven’s success in 2018. The unit contributed to 4,827 yards on offense, the most in the NE-10, which included just shy of 2,000 rushing yards. The line also allowed Patterson to be sacked only three times in 10 regular season games which also led the NE-10. The talented offensive line will be losing four-year starter Dan Iannone, but Pincince believes sophomores Dan Tomlinson, Mike Wilson, Will Ayers, and John Tyrell will step up and become part of the rotation in the fall.

The Chargers will be returning their defensive line in 2019 along with starting running back Ryan McCarthy and senior receivers AJ Greene and Devin Martin. McCarthy rushed for 781 yards on 153 attempts and five touchdowns as the Chargers primary back. McCarthy will be joined by sophomore Nyhsere Woodson on the depth chart and could be a threat to split carries. Martin is coming off a season- ending lower leg injury but will be back in 2019 to be a consistent set of hands for one of the four potential quarterbacks. Martin has caught at least one pass in every game he has played in his collegiate career. Greene will be a potential breakout candidate in this exciting Chargers offense. Greene finished 2018 with 30 receptions for 486 yards and one touchdown.

“Personally, I would like to be more productive than I was last season,” said Greene. “I would like to improve my stats and limit my mistakes on the field, in order to become a leader by example for the younger guys on the team.”

The Chargers will begin the 2019 season on the road on Sept. 7 when they take on Indiana (PA). Kickoff is set for 1:00 p.m. New Haven will play Stonehill in an out of conference game on Sept. 14 followed by eight straight NE-10 Conference match ups. There have been some changes in the NE-10 as LIU Post and Merrimack promoted themselves to Division I. Franklin Pierce has now joined the NE-10 in football, cementing themselves as a full-fledged member of the conference.