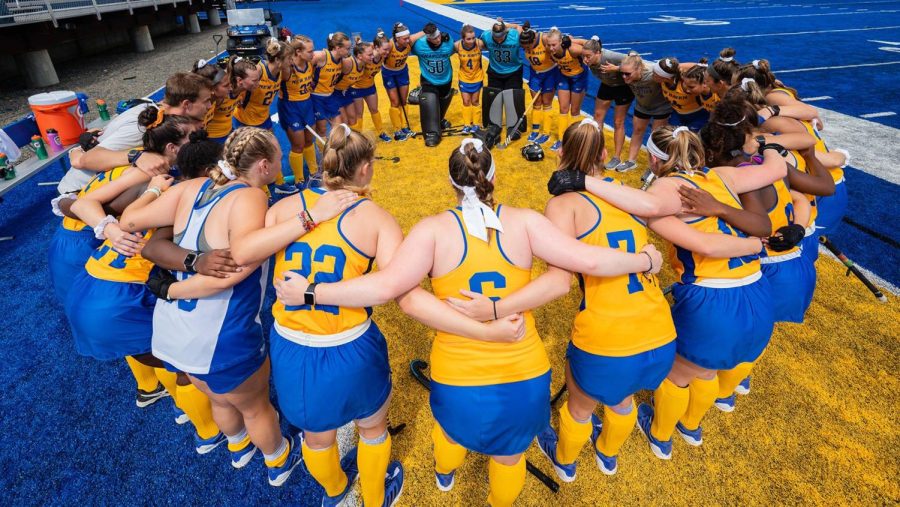 The seventh seed New Haven field hockey team made their first playoff game in program history a special one, as they pulled off a 1-0 upset over the second seed no. 8 Bentley University on Monday. It took 80 minutes, two overtime periods and a shootout for the Chargers to walk away with a berth into the semifinals.

New Haven relied on the strength of their graduate goalkeeper Keira Integlia, a transfer from Eastern Connecticut State University, who has helped turn around the Chargers’ defense. She made 12 saves in regulation, fending off a Bentley attack that took 10 more shots than New Haven.

With the score tied at 0-0 after regulation, the teams entered the first overtime period looking to find any kind of offense. With just 30 seconds left, Integlia made a save to keep the Chargers’ season going for at least 10 more minutes.

During the second overtime period, Integlia once again proved why she is one of the best goalies in the Northeast-10 (NE-10) conference. She made five saves against the Bentley offense’s barrage of shots on goal.

The New Haven offense was unable to get a single shot on goal.

After 60 minutes of regulation and 20 minutes of overtime action, each team went into a shootout as they looked to stave off elimination.

New Haven led the shootout off, with senior Reilly Bialko setting an early tone and making the first shot. Integlia responded on the defensive end, as the Falcons’ first shot went wide, giving New Haven a 1-0 lead. Junior Katie Durkee stepped up for the second attempt, slipping the shot past the goalie and giving the Chargers a 2-0 lead. The next Bentley shot went wide again, keeping the score at 2-0.

The third attempt for New Haven was waived off due to a foul, and Bentley answered with a score of their own. With the score at 2-1, senior Taylor Geaglone netted a goal to extend the lead to two and pressure Bentley to make their next shot. With the season on the line, Bentley’s attempt was blocked by Integlia to give the Chargers the win.

With the win, New Haven’s season continues for at least one more game. In the NE-10 semifinals, they will face off against sixth seed Adelphi University, who pulled off an upset of their own over third seed Stonehill College on Monday.

Despite their seemingly low ranking in the conference playoffs, Adelphi is still the no. 9 ranked team in the country. In their two matchups this season, the Chargers are 0-2 including a 9-1 loss to the Panthers on Oct. 16, their worst of the season.

The game will take place Thursday in Garden City, N.Y., with a 1 p.m. start time. Stats and a live stream for the game can be found at NewHavenChargers.com.