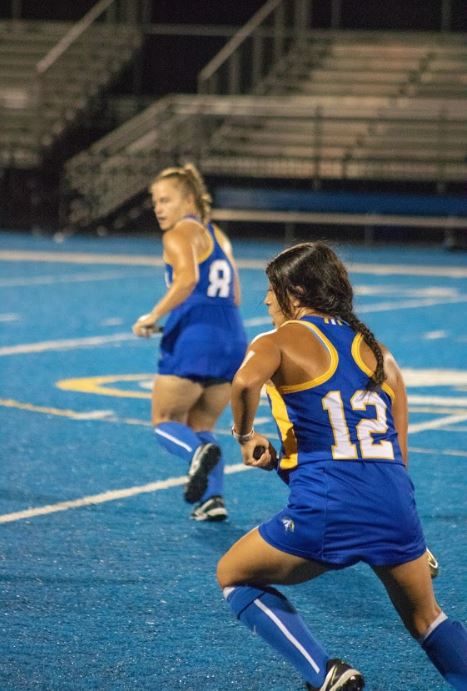 Field hockey won its first home game on Oct. 9 on the blue turf as freshman Morgan McCarty scored the game-winning goal with just 4.4 seconds left to lift the Chargers over rival Southern Connecticut State 2-1. This was also the team’s first Northeast-10 conference win.

It was a goal by Southern Connecticut in the second half, just two minutes after a New Haven goal was waved off that opened the scoring. The Chargers quickly battled back and equalized on a goal by freshman Julia Battino off a pass from junior Ashley Higgins.

The game appeared to be heading into overtime as the Chargers pushed one last time upfield in the final 20 seconds of regulation play. Freshman Alexis Rider saw the opportunity and pounced on a gap in the defense, drilling a shot from near the top of the circle that was tipped on goal by McCarty to put the Chargers up 2-1 with just four seconds left on the clock. That gave the program its first NE-10 victory and its first victory at DellaCamera stadium.

“This means a lot to our team, being our first year competing in the conference to get this first win, fairly early in the season is a huge confidence boost for us as a team,” said head coach Kelsi Lykens.

This is the team’s first year as an official team in the Northeast-10, after the team’s inaugural campaign in 2017 where they were ineligible for the playoffs.

The team fell 1-0 to Bentley on Friday (Oct. 12), but will look to get back in the win column Wednesday when they take on LIU Post at 4 p.m. in New York.